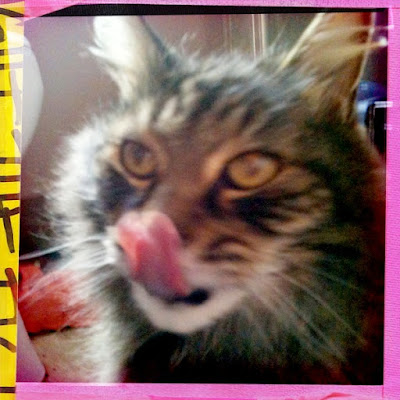 I got Whisky in 2003 from an ad in the paper from a lady who was giving him up because her boyfriend was allergic - she had gotten him previously from the SPCA. I was looking to up my numbers from one to three cats. 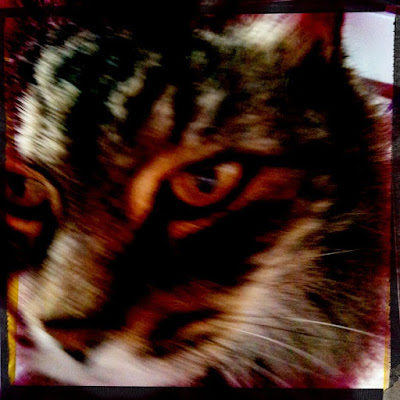 I liked to keep my numbers of cats at three because I thought that kept an uneasy alliance - 1 cat was too lonely, 2 cats was too cosy, but 3 cats kept the atmosphere lively. In the years since 2003 both Liam and Gizmo have passed on - but Whisky has been the perfect cat - completely bomb proof to absolutely all the dogs I've brought into the house - not taking any shit from any of them. 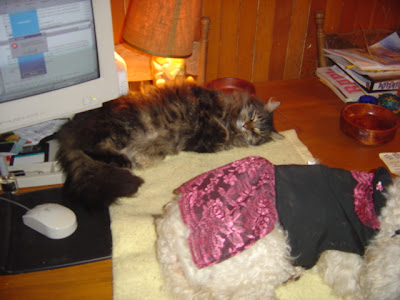 He was like Sylvester in the Bugs Bunny cartoons - walking amongst all the dogs in the dog yard - not caring what was going on the room, just gently moving amongst it all.

He was so perfect I didn't even have a litter box in the house - he did all his business outside - most people who have cats that go in and out of the house still have litter boxes - the cat will be outside for 10 hours and then come in and take a big shit - but Whisky - that's just how perfect he was. 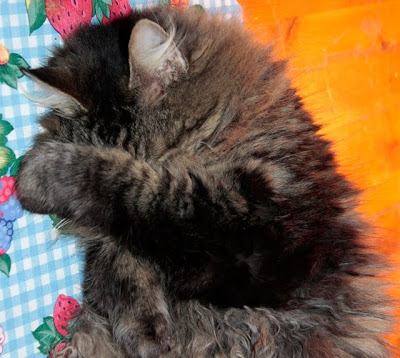 But he was of the same generation as Daisy and Charlie - and mortality has caught up with him, and last night I let him go. He's had a tumour growing on his left shoulder for a couple years - and I knew it was the thing that would end his life - and a couple weeks ago it ruptured. Other than that he's been the healthiest animal I've ever had. He's never been to the vet before - other than giving him flea medication I've never had to do anything with him except tender loving care - I figure he was about 18 years old when he died yesterday. 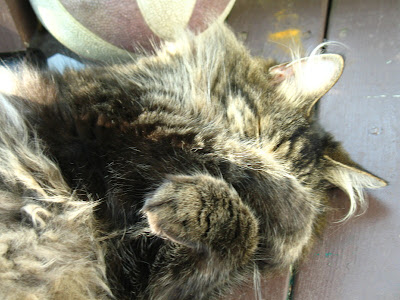 He was probably the last cat I'll have - Bubby is not a fan of cats - so I am not going to replace Whisky - and really, I can't think of any cat that could ever replace him.

Rest in peace, Whisky. He's got his own category on this blog - he was an awesome little cat.

ps - I took him to the Halifax Veterinary Clinic - they were super, and I have to admit that I took him there on purpose - I knew that when I was finished I'd be pretty upset - and there is a Tim Horton's Cold Stone Brewery right across the street - and those who know me know that my favourite thing in the world is ice cream - so when I was finished at the Clinic I could immediately go and drown myself in chocolate ice cream.

to Horseshoe Island and eating every last bit of the ice cream that you have just bought. About fifteen dollars worth of ice cream should just about suffice.
Posted by Joan Sinden at Tuesday, July 19, 2011

Email ThisBlogThis!Share to TwitterShare to FacebookShare to Pinterest
Labels: memorials, Whisky the cat