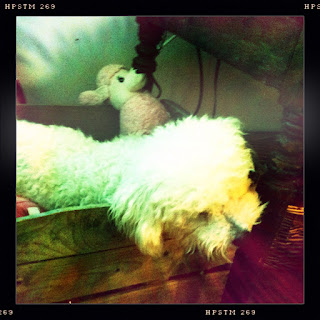 There's a link to an article floating around Facebook right now about a really good book that I'm going to get the next time I can get a bookstore - it's about a book called "In Defence of Dogs, why dogs need our understanding" by John Bradshaw - and he says that dogs don't want to dominate or control us - they want to control their own lives. There's another really good article at the Magazine, "The Independent" about the book as well which is also a must read. 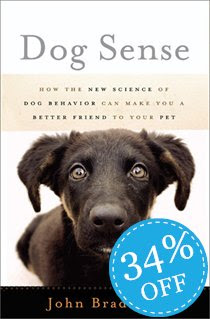 NOTE: I just checked the Chapter's website - and it appears that the book has a different title in Canada - up here it's called "Dog Sense: How the New Science of Dog Behavior Can Make You A Better Friend to Your Pet - so if and when you go looking for the book - this is what it's called!

It makes sense to me. I've never bought into the domination theory of Cesar Millan, the Monks of New Skete and their types. I have always looked for a back and forth communication with my animals.

I am not a dog trainer and I never will be. I don't want to be, I will always only be a dog owner - but I have tried very hard to never hurt my dogs in the way that I have trained them - because with all the different training techniques out there - it is pretty easy to do more harm than good.

Because that's what he is - a family member of yours, for good or for bad. You've chosen to bring him in to your family. And now you're doing all these crazy things to try to make him conform.

Cesar Millan says that the dog wants to dominate us - become head of the "pack" - but John Bradshaw has come out and said that he just wants to be able to control his own life, and that all they want to do is to please us.

I buy into that theory a lot more than the dominance theory.

When I got Charlie (and his sister Leonard) and became obsessed with dogs and was reading everything I could get my hands on - what made the most sense to me was the "nothing in life is free" philosophy (which some trainers say is also an aversive technique because it involves withholding things that the dogs wants until he "earns" it - and I should say I don't use the program anymore). That was after having made every mistake I could possibly make on my first dog George - who was a beagle mix and horrible barker - who I threw jars of pennies at and even put a barking collar on that my inlaws bought for her that made a horrible noise everytime she barked. Poor George.

It carried over to Leonard who was the highest strung sheltie mix you'll ever meet - and I put it on her a couple times and it affected her for the rest of her life - and it was then that I realized that simple training tools could go from being a training tool on one dog to a form of abuse on another dog. It was one of the most valuable things I learnt in my whole life - and it was so unfortunate that I had to learn it at the expense of another sentient being. Poor Leonard.

I am so glad that hopefully I only have made every mistake once.

There's a dog trainer I've been enjoying lately that I've been watching videos by - his name is Zak George - and he's got a facebook page at https://www.facebook.com/TheZakGeorge - he does whine quite a bit about how he's so much better than other trainers, which is a bit annoying, but other than that he's pretty good to listen to.

I am finding it all very interesting with the new puppy - he is very smart and can figure things out. Buttercup doesn't let him get away with anything when it comes to her - but he's very respectful of her which is a good thing.

What is going to be my challenge with Bubby isn't other dogs - it's going to be humans. I got him when he was 7 months old - so something happened in his first 7 months during one of his imprint periods that has made him be fearful of humans and he reacts by being very timid, and being fear aggressive with some people - he lunges out and tries to bite people's ankles - which is cute for about 5 seconds - until he makes contact.

I want to be able to take him shopping with me like I have been able to do with Buttercup - but I don't want to have an incident like the woman did in Home Depot in the States - so I am taking it very slowly - we'll see what happens. I only want good things to happen when we go shopping - all the way around.

I plan on having Bubby for about 20 years - that's a long time to not be able to do stuff - so I'm betting that he's smart enough that we'll figure things out together. It's all sunshine and lollipops.

Especially if it's a 2 way conversation and we are both getting what we want, right? Once I read John Bradshaw's book, maybe I'll have it all figured out :)
Posted by Joan Sinden at Friday, July 22, 2011