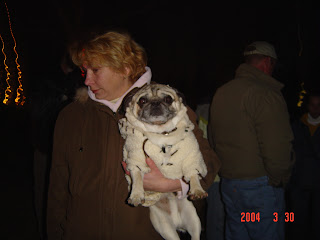 I have known Chandler and his Mom Sandra since 2003 when Hurricane Juan closed down Point Pleasant Park and I started going to Seaview Park everyday with my dogs Charlie - and his sister Leonard who I had at that time. 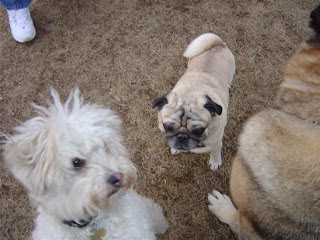 At that time Chandler had a sister who was a german shepherd named Piper who was the gentlest, most beautiful dog in the world. And Chandler was a puffy, strutting, king of the world, I am the centre of the universe amazing fawn pug - who was the type of dog that was not to be ignored by anybody coming to Seaview. 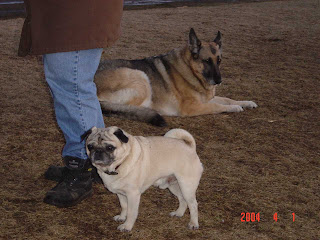 We were all part of a group of regulars who came to Seaview every night at 6pm - and I was so lucky to become friends with the "regulars at 6pm" - inside and outside the park - Chandler and his Mom were - and are very special dogs and people.

Chandler died this week of old age - he was as lucky as Charlie was - living his whole life in the same home, coddled from the beginning to the end of his life. He was the symbol of dog friendly Halifax just like Charlie was - his Mom has been a leader in keeping Seaview Park open to offleash activities - participating in the constant cleanups that go on there - and maintaining the blog Seaview Park Woofs and Snorts so that regulars can stay up to date on what's going on at the park.

It doesn't make mourning any less painful when you know your dog has lived a good long life, in some ways it makes it hurt more because you've had them in your life for so much longer - but I think in some ways it should give some comfort to know that you always did the right thing by them. Right up the very end.

Chandler was definitely one dog in a million - you had to know him to love him, and all who knew him definitely did love him - with all his snorting quirks.

Luckily he leaves behind a sister Suzie to fill Sandra's house. I haven't met Suzie yet, but I'm sure that she's just as much a fire cracker as Chandler was. If there's a heaven for dogs - Chandler is being saucy to Charlie and Daisy right at this very moment. There's no doubt about it.
Posted by Joan Sinden at Friday, July 15, 2011