I hope Yarmouth does the right thing after dog bite incident 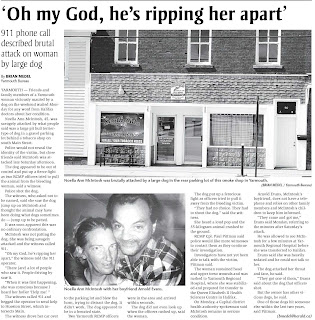 It's been in the news that a woman was critically injured by a "pit bull" type dog down in Yarmouth yesterday - she was injured badly enough that she had to be air-lifted to Halifax where her condition has improved from critical to serious.

Tonight on the news the Mayor of Yarmouth said that he is looking at changing their bylaw to tighten leash and muzzle laws in their town. I liked that nowhere in the news piece did anyone say that "pit bulls" needed to be banned - but in several places the victim's relatives and friends said "it doesn't matter what kind of dog you have, no dog is allowed to be vicious", and the victim's boyfriend said "I've had all kinds of dogs in my life and none of them ever bit anyone -it's all the way they're raised" - so they all understood that it wasn't the breed of dog that caused their loved one to be so seriously injured - it was the dog's owner who caused the situation.

In fact - people are calling for the other 2 dogs owned by the attacking dogs owner to be seized. The dog who attacked the woman attacked someone else in the last 2 years - and for some reason was returned to his current owner - and now this horrific attack happened.

Reading the current dog bylaw for Yarmouth - I can understand why - it is a horrible bylaw.

You can read it here - http://townofyarmouth.ca/town-council/by-laws

Basically they're allowed to shoot on sight any dog that they feel like shooting for whatever reason they feel like shooting them for - but that is just about the most reactive kind of legislation you can have - the dog is already in the process of killing your dog, your animal, your kid or an adult - it's not being proactive at all - which is the worst kind of legislation you can possibly have (in my opinion).

There is nothing in the bylaw that actually protects humans from dogs - and also protects dogs from humans, which good bylaws today do.

I also hope that Yarmouth doesn't act really reactively like it has in the past.

In 2006 they almost passed a public space ban by banning all dogs from their downtown area because there were some people who were afraid of the young people who were walking their "big macho dogs" in the downtown area. Luckily at the last minute they listened to the public outrage and didn't go forward with it. I wrote a post about it at the time if you want to read the background to that story.

This horrible incident could have a good outcome if Yarmouth chooses to take the opportunity to update their dog bylaw and do what Windsor did and include the NS SPCA and the public and stakeholders in the process. I hope they do that. They don't have to re-create the wheel - they don't even have to look very far.