Coyotes inside the HRM - UPDATED....

Tonight on the news there was a report about coyotes attacking a man inside the HRM (and actually only a a couple streets over from where I live) - and the news has stated that they're sending trappers in to "search for the coyotes" - which means that they're going to be setting traps - and killing them - but it also means they're going to be having traps there that will kill anything else that comes along.

I have to admit that I haven't really paid a whole lot of attention to the coyote cull in the last year that's been going on in Nova Scotia, except to think that it's a huge shame. It seems to me that they could be setting live traps and relocating the coyotes rather than killing them - but I think they are saying that they're killing the coyotes because they've gotten too "aggressive", so they've got to be killed, and that coyotes aren't a native species anyways, so they don't really matter. 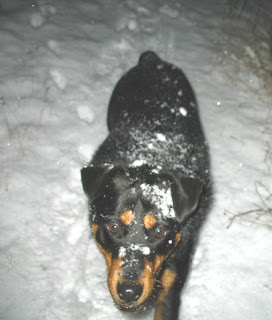 The postings that come through my Facebook are all about how the cull shouldn't be happening - but today's story has caught my attention - because now that a coyote interaction has happened within the HRM - that means that trappers are going to be setting their traps in areas where potentially off-leash dogs are going to be walking - and that has me very worried.

As a person who is blessed with a dog who makes very poor introductions with other dogs - I walk my dogs in places that other people will generally not tend to go - and I have spent a lot of time walking my dogs at night. 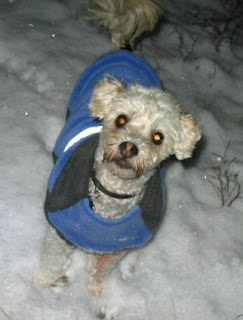 And these are tips that I give to other people on my page called "what to do when your dog isn't dog friendly" - because it's my belief that just because your dog doesn't get along with other dogs - that doesn't mean he can't have a high quality full flavoured, multi-faceted life - which includes lots of off-leash activity - you just do it at other times and in other places than you'd encounter other dogs.

But if there's going to be traps set, and coyotes everywhere - what's a dog owner to do?

Tonight I am not feeling very well.

If the traps don't get us, the trappers will - I feel like it's not a good idea to be walking my small dog in the woods after dark right off leash right now - the danger is just too great - a coyote might get her - and walking my large dogs after dark is too much of a danger because they might get caught in a trap.

Back in 2006 I wrote a post because the Department of Natural Resources came out with a document about keeping your dog safe while you were in the woods - and it includes a section on how to cut your dog out of a trap - I would suggest that if you're going to walk your dogs in any wooded area - start carrying wire cutters - and read this post.

There really is overkill though when it comes to coyotes - with the fear mongering that's going on in the media, and the amount of traps being set by the trappers who have been sent in everywhere by the department of Natural Resources everytime there's a coyote sighting - it seems that when given a chance - instead of treating a coyote run over by a car as "inured wildlife" - it was just summarily shot by the police called to deal with the animal. If this animal would have been one of the beloved foxes or deer rehabilitated every year by "Hope for Wildlife" - I wonder if this animal would have had a different outcome. I don't imagine "Hope for Wildlife" are allowed to rehabiliate coyotes.

A news story came through the internet from Boston that had a VERY DIFFERENT ending - a coyote was stranded out on some ice - animal control were called - and they actually SAVED THE ANIMAL - can you believe that? What kind of a world do they live in down there in Massachusetts that they'd save the life of a worthless being like a COYOTE.....

BOSTON -- Cold water rescue crews saved a coyote that was stranded on the Charles River on Tuesday.

The incident happened near the Charlesgate Yacht Club in Cambridge.

When animal control officers entered the water, the coyote jumped from its frozen perch into unfrozen water, according to state police. The animal swam a short distance before climbing back onto a frozen area and running to land toward the Museum of Science.

The coyote was captured by members of the Animal Rescue League early Tuesday afternoon.

It was taken to Tufts Wildlife Clinic in Grafton for treatment.

The animal was examined before being placed in the clinic's carnivore ward for fluids, food and overnight observation, according to Tufts spokesman Tom Keppeler.

Here's an article that was in the paper on January 14th about Antigonish County - I found it pretty distasteful - I got an email at the time from a friend who lives up there who said that she's had friends who've lost about 3 dogs that she knows of - including a lab - not all from the same person.