In the summer of 2008 there was a puppy miller up in New Brunswick - Chapman Kennels (need I mention that Chapman Kennels was the kennel that shot 175 of their own dogs in the head when they decided to go out of business a short time later - and nothing was ever done about that) - who were having an unbelievable sale - so Gail Benoit and Dana Bailey went up there and bought 37 puppies. They figured they could make a killing and sell them all really fast like they usually do and everything would be really sweet - they'd make a ton of dough.

But it didn't work out that way - puppies started dying left, right and centre. That thing that had plagued them their whole career had reared it's ugly head in a huge way - PARVO - and puppies were dying before they could even offload the damn things - dying right on the way to the stupid parking lot where they were supposed to be meeting the suckers who were going to be buying the stinky shit filled puke heads. It was a huge disaster.

And to top it off - the lolly-asses who they were selling the crap-shits to were making a stink and calling the SPCA about the puppies that were dying on them and making a big deal to the newspapers and television. What a crock of shit.

What was supposed to be a huge pay day was turning into the worst summer ever for Dana and Gail.

But it turns out that JUSTICE HAS PREVAILED - and all the charges that were laid based on the puppies they sold in the summer of 2008 - were dismissed today - December 13th, 2010. Gail Benoit and Dana Bailey have walked away scott free.

All those puppies that were confirmed to have died of parvo, all those people who bought puppies from them that died in their arms within hours or days - and paid them cash money for those puppies - and then complained to the SPCA - didn't provide enough or the correct amount of evidence to prove that Gail Benoit or Dana Bailey had committed animal cruelty upon those puppies before they sold them to the people who had bought puppies from them that very quickly died after receiving them.

So in other words - it's not animal cruelty to sell a puppy that dies within days or hours after you sell it out of the back of your car or in a parking lot. 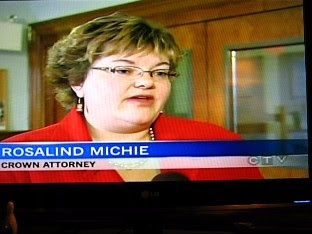 That is what we learned today. As the crown attorney said it was a "point of sale issue" - it had nothing to do with animal cruelty I guess.

So what have we learned today? That the Justice system is going to do nothing for people who buy puppies out of the the back's of cars or parking lots - so those people should beware.

And what have people who are in the animal advocacy world learned today? That we have to start right back at the very beginning.

We are not going to effect change through the justice system. We are not going to shut down puppy mills or puppy brokers or people who abuse animals by having them charged criminally. We have to shut them down at the source through educating people one on one about what is the best way to acquire animals, and where companion animals come from when they buy them out of the back of vans - and what possibilities they're taking on when they buy them in such an easy way.

When you buy a puppy that's parents live in a basement with no access to fresh air, fresh food, human companionship or love - you are going to get an animal that is going to not necessarily be the animal that you want to spend the next 17 years of your life with - it's not worth the $150 you're going to save.

And people need to know that - and be re-told that - over and over. Until the puppy-millers and puppy brokers market is completely dried up.

Because that's the only way they'll be put out of business.

And I also have to say - we have to make the other ways we acquire animals - EASIER for people as well - make shelters policies for adoption - easier, faster, streamlines - so that people don't feel they NEED to go to a parking lot. Encourage responsible breeders to be more open to selling their animals to a wider audience. THEN we'll be getting somewhere.

I hope that day will come in our lifetime - so that no more puppies have to die in sheds and basements because puppy brokers have gotten an unbelievable deal from a puppy mill. And they know they can unload them quick.

It certainly is sad though that we don't have legislation that can do anything about such poor customer service. These people didn't even get their money refunded. Now THAT'S bad customer relations....

Here is today's CTV news piece about the story, such as it is -


Here's a link to another blog about the story as well
Posted by Joan Sinden at Monday, December 13, 2010