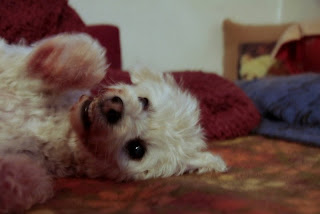 Today is Buttercup's 16th birthday - or at least I think it is. She could be any age, really. I've had her for a glorious 7 years - and when I brought her home from the Dartmouth SPCA on August 17th in 2003 the vet though she was between 7 and 9 years old - so there is a few years wide parameter that she could be, so I just picked an age. So 16 I've chosen it to be.

And in rescue, since you don`t know when your animal is exactly born, you celebrate the day you bring them home - they`re "got day" - and that's today - and I've celebrated it every year - and every year for each of the dogs - and when you've got a blog - you get to document it too, which is pretty awesome.

Today what I thought I'd do is videotape how I'm greeted by her when I arrive home from work - I turned the video on in my Iphone when I opened the door - and left it on for like the first 5 minutes - and just documented what I get to watch when I first get home.

You know all that business about how you're not supposed to make a big deal about your entrances and exits so that your dogs don't have separation anxiety? That's never worked for me - because I still have huge separation anxiety anyway! And you'll notice Butttercup gets to be freaking out, while Daisy and Charlie just quietly come and get pats and scratches and love while she does her performance - such is life in this house - Buttercup is the queen of all things.

Buttercup in 2007 - it seems I missed documented her birthday in 2007, I had a lot of shit going on that summer, with people threatening to shoot Daisy and stuff - but I did take some photos of all the dogs having a good wrestle on August 23rd, 2007 that looked like fun

Buttercup in 2005 - on August 17th, 2005 I seemed to be more concerned with a crab tree that I'd found on my property, but there's a photo of Buttercup in the post, so that's okay too - I was still in the flush of home ownership

Email ThisBlogThis!Share to TwitterShare to FacebookShare to Pinterest
Labels: Buttercup