Jackie was a symbol for a lot of things

Tracy Jessiman wrote a beautiful letter to the editor today at the Chronicle Herald about Jackie. It made me remember that Jackie was a symbol for a lot of things during his lifetime. He was a symbol of a survivor of abuse, but he was also a symbol of a political system that ultimately came crashing down - thanks in large part to him actually surviving what he had gone through.

If circumstances hadn't have played out just as they had - he never would have survived the system that was in place at the time of the Celtic Pets scandal at the NS SPCA.

Last week I talked about Oreo's law down in the States and how they want to make it illegal to kill animals that are on death row that have foster homes waiting in private rescues that are in shelters - during the Celtic Pets Scandal - there were at least 5 dogs who were killed by the NS SPCA Dartmouth shelter - killed by the say-so of Pam Keddy and Judith Gass - the people in charge at the time - who had foster homes waiting, largely through Animal Rescue Coalitions - but instead - the management chose instead to kill the dogs. 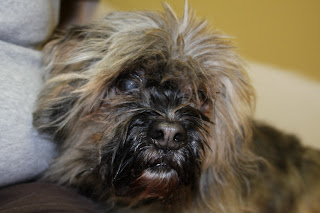 When all the dogs and cats came up originally from Cape Breton after the seizure, there was a short 24 - 48 hour time period when somehow Animal Rescue Coalitions was able to get Jackie out of the Dartmouth shelter because he had been a previous foster/rescue of theirs - so that's how I originally came to have him in February, 2008. At the time I got him I couldn't even say he was a Celtic Pets dog - he just suddenly started appearing on my blog one day.
But behind the scenes - Pam Keddy was threatening to send her cruelty officers to my house to seize him so she could have him back at the shelter. She needed him as "evidence". She would rather have had him in a cage than in a home. And because of his behavioural problems - he would have for sure have ended up as dead as the other 5 or 6 dogs they also killed for "behavioural" problems.

At the same time - Zonda and Alice MacIsaac - wanted Jackie back too. They said that Jackie was the only dog they wanted back. So I had nightmares about them coming to my house too. Animal abusers or SPCA, take your pick - they were all bad in early 2008. And they all wanted Jackie for their own reasons.

The NS SPCA revoked mine and about 5 other people's membership - publicly kicking us out of the SPCA for being malcontents. We also got kicked out of a local umbrella rescue organizaiton called "Maritime Animal Rescue" that is owned by Pam Keddy, and is really now just a shadow of what it used to be. 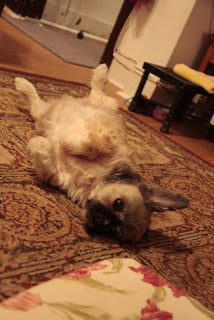 So Jackie was the symbol for all of this - what an animal abuser can do to an innocent dog - what a dog can survive and come through, what an organization that has existed for more than 100 years can become - and do to animals that are in it's care - and ultimately, that the power of his face can blow it all away.

It is truly unfortunate this his abusers - Alice and Zonda MacIsaac, were only slapped on the wrist with their conviction on one count of animal cruelty each and a 20 year ban on owning animals - but the NS SPCA was transformed into an organization today that I am actually proud to see has come full circle, and has a no kill philosophy as the centre of their strategic plan - and has great people in place at the top of their organization.

I am terribly horrified though that the people in charge at the SPCA at the time of the Celtic Pets scandal are now heavily involved at the Homeward Bound Pound - a facility that is privately run and therefore can do anything they want to animals because they don't have to provide any statistics to the public or give any public disclosure about what they are doing. I am very worried about any animal being taken into that facility currently. Truly. 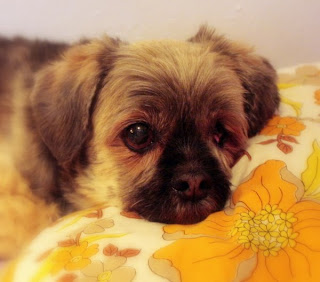 Jackie was a good dog who lived through a lot of pain in his life, but he overcame it to enjoy what he could. I remember the first night he slept at my house - I put him up on my bed and he rolled and rolled and rolled and rolled all over my sheets - it was like he hadn't been on a bed in forever. And from then on he slept on my pillows - and I had to find a different spot on the bed to put my head. But that was okay.

I was so lucky to have had him.

Tracy's 12 year old niece wrote her an email today about the letter to the editor, and I thought I'd put that here at the end because it's just so precious, Tracy obviously has a very animal loving family -

"hi aunt tracy i just wanted to say that i loved the article in the news paper about the dog that passed away and was abused, I thought it was very sad and i give all my love to the adopted owner. It was very well said and detailed in the article. I cut the article out and im going to put it on my wall by my desk.Love you lots xoxoxoxo