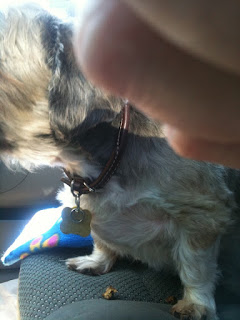 I've been taking Jackie out to Westwood Hills every week for him to stay for the day so they could do a glucose curve on him and he hasn't been curving - his glucose has been staying high all day, and when I took him today he wouldn't eat breakfast so I couldn't give him his insulin so they really couldn't do a curve on him they said so they took some blood tests instead and checked his liver again and his liver readings have risen dramatically since the last time they took them so he definitely has some undiagnosed liver disease that is in addition to his diabetes. They also did a breath test and he has ketones in his breath which means that his diabetes is getting worse faster than we can raise the insulin - we have been raising it each
week that he goes out there - from 2 to 4 to 6 and today it was raised to 8 units.

He has been losing weight and it's now quite noticeable - so we have to pretty much acknowledge that he is dying and there's not too much we can do about it but try to make him as compfortable as possible. The key will be to try to get him to eat - and as funny as that sounds - that is becoming harder and harder every day.

I don't know if he has a couple of weeks or a couple of months - I
hope it's the latter, but it is coming. He does seem to be getting a little bit worse each day.

He is comfortable and I don't think he's in pain, if he was in pain he's the kind of dog who would tell me, I'm pretty sure. He really likes sleeping in the bed at night, and when he's hungry he's enjoying his food - so he's got some life, and he's still got dignity - he's got bowel and urine function - he just does it wherever he feels like
- my house currently smells like a barn, but that's okay - it won't smell like that forever.

Jackie has had a hard long life. I hope that the end isn't too awful for him, and when he's ready to go I'll see it coming and do it at the right time.