My kingdom for a good groomer 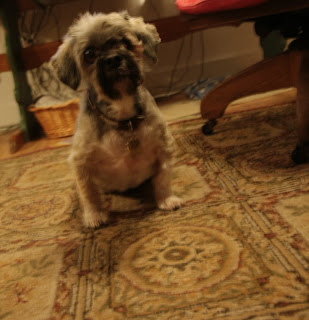 Is this the face of a dog who groomers everywhere run from in fear? That groomers fear and loathe and say - "I refuse to groom this devil dog - take this beast from my premises!" 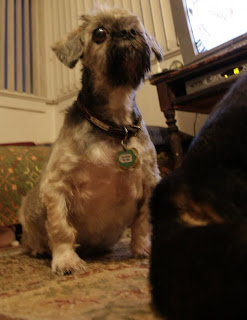 I am having the worst time getting Jackie groomed - at the groomer today they told me they are willing to try cutting his hair "one more time" - and the next time I'm the one who has to drop him off - not my father, so that it's me who puts the muzzle on him - not them - and they said they couldn't cut the hair around his face because he was biting at the clippers, and he bit a groomer and a technician and blah blah blah.

Previously I had called a couple groomers in the city and described how Jackie was to groom and was turned down flat out - and told to take him to a veterinary clinic's groomer - which is what I've done - and now they're even threatening to not groom him - and they say he's too old to be sedated anyway - but what's a person to do - he's got to be groomed!

I had such luck for almost 2 years with a super gentle groomer - why do women have to have babies and ruin everything! The groomer today had TWO muzzles on him AND an elizabethan collar on Jackie - now tell me she wasn't being rough on him - it's no wonder he was trying to bite her. It's no wonder dog's develop problems at the groomers. 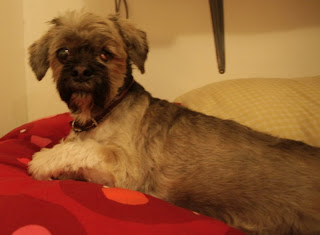 I don't know what to do - I'm driving one hour down to Hubbards on Thursday to test drive a new groomer with Buttercup - I hope she'll think about taking on Jackie.

Surely to dog there's a groomer out there somewhere who takes on the worst of the worst and does it without being the Jeffrey Dalmer of groomers. Poor Jackie - I feel so bad for what I have to put him through in order to get his hair cut - if only he could figure out that all the commotion around him was there to help him.
Posted by Joan Sinden at Monday, June 14, 2010