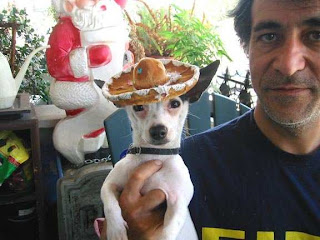 Last January, Francesca Rogier brought a man by the name of Jeff de la Rosa into my life. He had a dog named Stu who had been impounded in Los Angeles for 4 years and his story was very similar to Francesca's - he felt that Stu had been seized illegally and he had dedicated his life to freeing Stu - and he had been using the internet and the international dog community to try and do that.

For some reason Jeff decided to focus on me and became very abusive towards me,leaving numerous comments to my blog - which I never published because they were personal attacks against me - threatening me personally - even going so far as to create what he called a "parody" blog of this blog - calling it "Me and my big fat mouth" - saying things like - "Joan Sinden will not be allowed to continue to exert her perceived power over anyone, ever again." and "Check your doorstep, your lawsuit should be there any day now. Cretin. Yes, this is proper writing. It's called "style" and is not to be confused with poor English and worse grammar. The difference here, Joanie baby, is that our Joan posts ALL comments with no fascist "moderating" of dissenting opinions."

The man has some issues. In July, 2009 the issue of his dog Stu was finally resolved - he was sent to a sanctuary to be rehabilitated and live out the rest of his life. Los Angeles has good legislation that way - and the right decisions were finally made after almost 5 years, and Jeff lost his fight to have the dog returned to him, and because of some other legal problems - including punching the owner of a rescue called "Barks of Love" in the face - his harassment of me seemed to stop. I figured he had moved on to someone else somewhere else on the internet.

This morning he left 3 new comments on my blog that have compelled me to make this blog post - because I want it written down somewhere publicly about him that he has been harassing me and threatening me.

I've never worried about him before because he's always been in Los Angeles - way on the other side of the continent, but this morning I got some comments frmm that have scared me. And they say -

"Taking a trip. You might want to remove your inaccurate posts. Turns out I can make a complaint in your courts ...even as an American. "

The fact that he says he's "taking a trip" - and that he's threatening he might be coming to Nova Scotia - is to me a deliberate attempt to threaten me I believe.

If you come here and you approach me or one of my dogs or family, there will be consequences.

I would also like to mention that Jeff is #25 on Francesca Rogier's list of "special people in her life" - 10 spots above Ted Efthymiadis - the trainer who is supposed to be assessing Brindi to judge whether or not Brindi is safe to go out into society, and also who is going to draw up a rehabilitiation program for Brindi and Francesca once Brindi is sent back to Francesca - free of charge, because he feels so strongly that Brindi should go back to her owner.

ps - I chose that photo of Mr. De la Rosa on purpose amongst other photos that I could have chosen. Imagine if you were being held in such a manner as Jeff is holding that dog - with his finger pulling your underarm skin so tightly. His finger is almost impaling that dog in his armpit. That dog in that photo is in PAIN because of the way that Jeff is holding him. When you look at that photo you can clearly see what kind of a dog owner this man is. It's right there in that photo.
Posted by Joan Sinden at Saturday, March 13, 2010