This is further information about the post I made on Wednesday about the dog found hanged in Brookside, outside Halifax 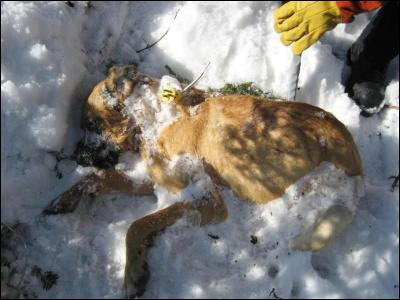 This photo from the SPCA shows a male mixed breed-dog found dead in the snow Wednesday after it was hanged from a nearby tree in Brookside, outside Halifax.

The Nova Scotia SPCA is seeking the public’s help in finding out who is responsible for killing a dog the agency says was recently hanged from a tree in metro.

Sean Kelly, a spokesman for the agency, said Thursday the animal’s death, which the SPCA said was caused by being strung up with an electrical cord, is disturbing and worrisome.

The mixed-breed dog, about the size of a Labrador retriever, was an unneutered male found in Brookside, outside Halifax. An autopsy is being done in Truro and should help determine its age.

"It’s very concerning to us," Mr. Kelly said of the dog’s death. "Anybody who would be this cruel and this calculating to this dog, in my view, would have no problem doing it to a person."

Mr. Kelly said the SPCA received a phone call Wednesday afternoon about a dead dog lying in the snow in Brookside. It was near a tree that had an industrial electrical cord tied around it.

The dog had part of the cord around its neck.

An SPCA investigator sent to the scene made the grisly discovery, said Mr. Kelly.

"It appeared that the dog was hanged from the tree," he told The Chronicle Herald. "And then the person cut the cord on the dog and just basically left the dog there to rot."

The dog was tan with black on its nose and was possibly a mastiff mix, Mr. Kelly said. The cord found on the animal is white with a large yellow three-pronged plug; the plug has #6 written on it in black marker.

Under the Police Act, the SPCA is conducting a criminal investigation into the animal’s death and can lay charges, Mr. Kelly said. He said there are no suspects but a person has contacted the SPCA to say the dog looks familiar.

"They gave us some information to follow up on," Mr. Kelly said.

Mr. Kelly said the dog wasn’t wearing a collar and didn’t have any identifying material on it, such as a bandana.

"When the dog thaws out a little more we’re going to try and test him for a microchip," he said.

It’s not the first time a dog has been hanged in Halifax Regional Municipality. Ten months ago, a dead dog was found in woods in Upper Hammonds Plains. It had been strung up, too.

Regarding the hanging in Brookside, Mr. Kelly said the way the dog was killed was unconscionable.

"The horrible thing about this act is that the dog was cut down but left with the cord around his neck, which shows us that the killers actually watched him die, then cut him down," he said.