We need to keep watch over Councilor Blumenthal

So last week we read that HRM Councilor Jerry Blumenthal was having a knee jerk reaction to a valley bull dog biting a child and was interested in instituting breed bans in Nova Scotia.

I emailed him personally and he emailed me back saying that he had "specified no breeds, just vicious dogs" - leading us to believe that he had been misquoted and wasn't actually interested in breed specific legislation.

So next I emailed the author of the article - Rick Howe - and asked him if Mr. Blumenthal had been misquoted - and today I heard back from him - and what he wrote back is even worse than breed specific legislation.

What Mr. Howe said is - that Mr. Blumenthal said "he said he plans to revisit a vicious breeds ban sometime in the new year" - and when Mr. Howe asked which breeds - Blumenthal declined to say which breeds.

Well, pit bulls, rottweillers, and dogs like that are automatically considered to be vicious dogs - number 1. And if a dog likes to chase or snap or growl - it's also considered to be vicious - and it's got to be killed. Now THAT is bad legislation. And it sounds like THAT'S the kind of legislation Mr. Blumenthal wants to introduce here in the HRM.

So we need to watch Mr. Blumenthal's actions in Council and City Hall very carefully.

I'm going to paste the article from Mansfield Ohio that I read today to give a flavour of what our most esteemed newly elected Councilour might be wanting to bring here to our fair city. Heads up.

Richland County Dog Warden Dave Jordan said a citation was issued at 416 Fourth St. for having vicious dogs in the city limits. He declined to identify who was cited.

Jordan, three deputy dog wardens and five Mansfield Police Department officers were at the home. The officers also looked through the window of the garage behind the house but saw no dogs inside.

As for the fate of the dogs that were placed in waiting cruisers, Jordan said, "We're going to hang on to them and see what happens." 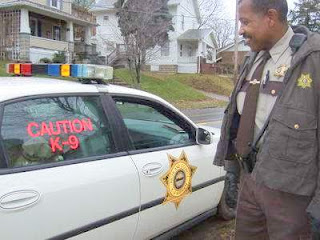 In addition to pit bulls, several dog breeds are considered potentially dangerous, according to research from the American Veterinary Medical Association, the Centers for Disease Control and Prevention, and the Humane Society of the United States. These include the Dalmation, husky, boxer, Prena Canario, Cane Corso, Chow Chow,
Doberman pinscher, Alaskan malamute and Rottweiler.

Only pit bulls and related mix-breeds are banned in Mansfield.

Mansfield Law Director Dave Remy said by state law the dog warden has jurisdiction to make the determination on what breed a dog is. Cincinnati, Youngstown, Reynoldsburg, Wooster, Garfield Heights, Girard and Parma are among other Ohio cities that have banned pit bull ownership.

Under Ohio law, a vicious dog is defined to include pit bulls regardless of their temperament or behavior, but there is no statewide prohibition on owning or keeping these dogs. The Ohio Supreme Court has upheld the state law.

Here is their vicious dog ordinance:

(2)"Menacing fashion" means that a dog would cause any person being chased or approached to reasonably believe that the dog will cause physical injury to that person.

(3)"Police dog" means a dog that has been trained, and may be used, to assist one or more law enforcement officers in the performance of their official duties.

(4)A."Vicious dog" means a dog that, without provocation and subject to subsection (a)(4)B. hereof:
1.Has killed or caused serious injury to any person,
2.Has caused injury, other than killing or serious injury, to any person, or has killed another domesticated animal,
3.Belongs to a breed known as the American Pit Bull Terrier, American Staffordshire Terrier or Staffordshire Terrier, or any mixed breed of dog which contains as an element of its breeding the breeds aforestated so as to be identifiable as partially of any one of such breeds.
B."Vicious dog" does not include either of the following:
1.A police dog.
2.A dog that has killed or caused serious injury to any person while a person was committing or attempting to commit a trespass or other criminal offense on the property of the owner, keeper or harborer of the dog.
(5)"Without provocation" means that a dog was not teased, tormented or abused by any person, or that the dog was not coming to the aid or defense of a person who was not engaged in illegal or criminal activity and who was not using the dog as a means of carrying out such activity.
(6)"Confined" means in a securely enclosed and locked pen or structure upon the premises of the owner of the dog. The pen or structure shall have secure sides and a secure top attached to the sides. If the pen or structure has no bottom secured to the sides, the sides shall be embedded into the ground no less than one foot. All such pens or structures shall be adequately lighted and kept in a clean and sanitary condition.
(b)Vicious dogs are hereby prohibited within the jurisdictional limits of the City.
(1)Persons who presently have vicious dogs licensed in the City shall make the dog confined in a locked pen on the premises and shall have liability insurance with coverage in effect, exclusive of interest and costs, of not less than fifty thousand dollars ($50,000) for damage or bodily injury to or death of a person caused by the vicious dog for each occurrence. The owner shall provide proof of current insurance coverage with the Chief of Police within thirty days of the effective date of this section. The owner shall not permit the dog to go beyond the premises of the owner unless the dog is properly in leash and the dog is muzzled in a manner that will not cause injury to the dog or interfere with its vision or respiration, but shall prevent it from biting any human or animal.

Further, the owner shall display in a prominent place on his or her premises a clearly visible warning sign indicating that there is a vicious dog on the premises. A similar sign is required to be placed on the pen of the animal.

"Properly in leash" means secured on a chain no more than three feet in length with at least 300 pounds of tensile strength and under the physical restraint of a responsible adult person.

Whoever violates subsections (c) or (d) hereof shall be guilty of a misdemeanor of the fourth degree. Subsequent violations shall be misdemeanors of the third degree.

I also looked at their companion animal cruelty to animals ordinance - and that one is pretty funny - they have this written into their cruelty act:

So in Mansfield, Ohio - if you are an animal trainer or a hunter - you can do whatever you like to your companion animal - mutilate, torture, tie out, starve - whatever you want - just say that you plan to use the dog for hunting - and you're pretty much scott free. I love Americans.
Posted by Joan Sinden at Tuesday, December 16, 2008