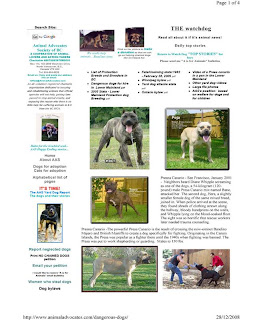 It is so disappointing when you think a group ascribes to the same ideals as you, only to find out that hidden somewhere they have an agenda that is dirty, dark and vile. 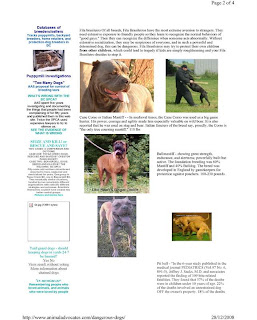 So it seems to be with the Animal Advocates Society of British Columbia - they are an animal advocate organization out there who has been fighting against the British Columbia SPCA and is actually currently being sued by them. 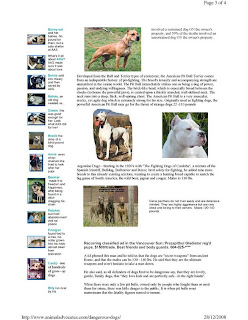 They also appear to do a lot of stuff for puppy mills, chained dogs, horse rescue, and have a large section of their website called the "Animal Advocate Watchdog News" - a newsreader that sends out action alerts constantly. 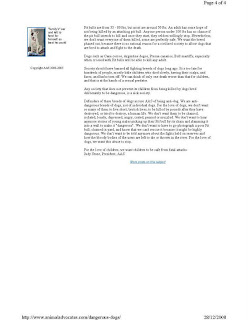 But it turns out they'd also like the extinguishment of all bull type breeds for much the same reason that PETA does - in order to save them from suffering, and so that they can't hurt any more children because they're all so dangerous to humans. What a pile of bullshit, eh? And they claim that they love animals?

"Society should have banned all fighting breeds of dogs long ago. It is too late for hundreds of people, mostly little children who died slowly, having their scalps, and faces, and limbs torn off. We can think of only one death worse than that for children, and that is at the hands of a sexual predator.

Any society that does not prevent its children from being killed by dogs bred deliberately to be dangerous, is a sick society.

Defenders of these breeds of dogs accuse AAS of being anti-dog. We are anti-dangerous breeds of dogs, not of individual dogs. For the love of dogs, we don't want so many of them to live short, brutish lives, to be killed by pounds after they have destroyed, or tried to destroy, a human life. We don't want them to be chained, isolated, lonely, depressed, angry, crated, penned or muzzled. We don't want to hear
anymore stories of young males picking up their Pit bull by its chain and slamming it into a wall to make it "dangerous". We don't want to have to go photograph a poor Pit bull, chained in yard, and know that we can't rescue it because it might be highly dangerous. We don't want to be told anymore about the fights held on reserves and how the bloody bodies of the users are left to die or thrown in the river. For the love of dogs, we want this abuse to stop.

For the love of children, we want children to be safe from fatal attacks."

Fear mongering at it's most degrading - because it's being said by people who should KNOW BETTER. 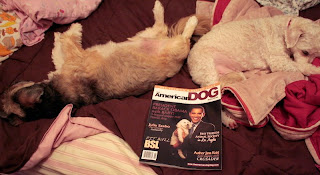 But on that same note, I received in the mail today my first issue of a new magazine that looks absolutely fabulous! It's called "The American Dog Magazine" - I saw it online a few weeks ago and subscribed immediately. It used to be 2 different magazines - the "Chicago Dog" and the "Colorado Dog" - and they've merged both those magazines into one new magazine - and it's super! The topics in this issue are amazing, and the contributors are one's we all recognize - Julia Szabo, Victoria Stilwell, there's even a short article in there by the former Tammy Grimes - presidennt of Dogs Deserve Better.

There's also several articles about dog law and being advocates for animals - and there's several very pro pit-bull articles - which is really interesting considering that the magazine is coming from Colorado - which is the state that houses the much pit-bull killing Denver.

I'm going to take my copy to Atlantic News to see if they'll consider carrying it there because I think it's a magazine a lot of people here in the HRM would really like - and everyone likes a new magazine to read!
Posted by Joan Sinden at Monday, December 29, 2008