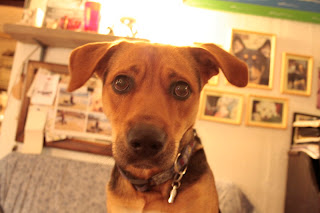 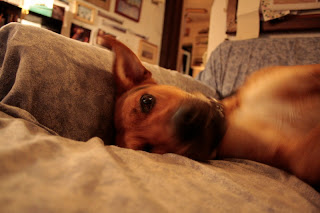 She didn't turn out at the place she was adopted to - who knew that an elderly couple wouldn't be able to handle a 9 month old puppy that loves to run but can't be off leash because when she runs she doesn't come back, and when she's on leash she's the world's worst puller? Maybe other owners would have enlisted the help of a dog walker and a doggy day care - but these people decided that they'd just return her, because they didn't think about the fact that when you take a dog on - it's a life to death committment.... shit - there I go. Oh - and they had her for a month and they didn't honour their adoption contract and spay her either - even though their daughter in law is a VETERINARIAN. How gross is that? 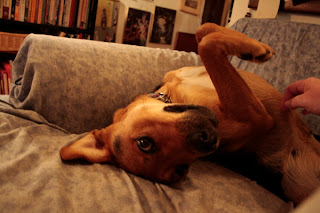 But Corky - at least they gave her a good name - seems unfazed by the whole thing - and is still a complete love bucket - and is hopefully going to a new home where they have another dog who is a perfect match for her. Everybody who has been in Corky's life are keeping all their fingers and toes crossed - because this dog is such a lovely dog. 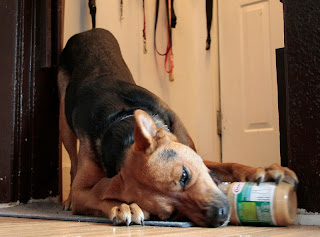 This is Corky today - she seemed hungry, a bit on edge - and shit, I wanted to take a nap - so I gave her a nice big kong full of good stuff. About 20 seconds in - she's back for some more attention - and about 1/2" at the top of the kong is gone. So I passed the kong over to Charlie - and filled up the almost empty peanut butter jar for her to work at instead. She seemed pretty happy with that. Mother of invention gets the early bird the nap. 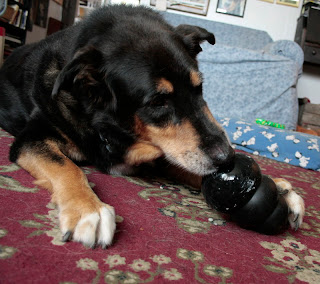 And Charlie was pretty happy to get a big kong!!! hahahaha! 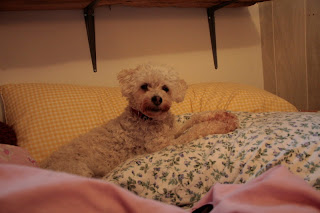 This is how Buttercup spent most of the day - looking out from the bedroom saying "how could you do this to me?" She also did it from my Dad's chair in the living room. 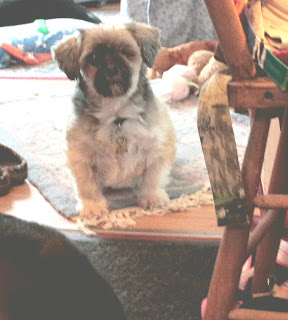 Jackie spent most of the day trying to direct traffic - but since he's almost blind - he was failing miserably. 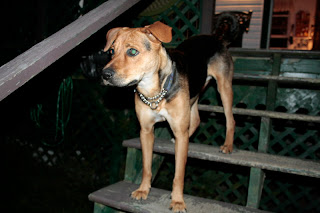 This is how Corky spent some of the day and evening - watching Daisy and Charlie play - she's still too shy to join in - although they were willing to let her - she's still to scared to do it. They're pretty rough players and have many years of experience - so she should probably just keep her body clean for her new brother or sister that she's meeting tomorrow anyway.
Posted by Joan Sinden at Saturday, September 27, 2008