Raccoons and Disease in the HRM 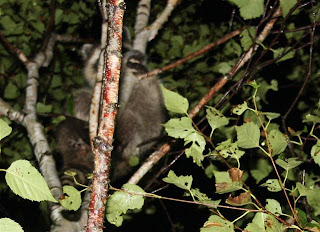 So the last couple weeks - every night the dogs have been out in the back yard chasing raccoons - and last week they actually caught one and for a couple minutes got to scrap with him. When I told them to "leave it", they eventually did. But what a high value thing would a raccoon be? That's better than 10 cats all at once. 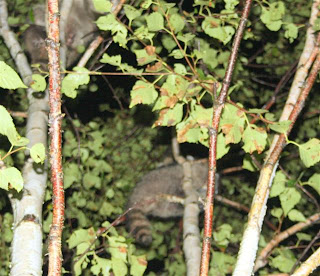 They are coming because my next door neighbour has a "garbage hut" as opposed to "garbage cans" - and the raccoons are pretty sure they've found their own Pizza Hut. And even better - the neighbours don't compost - so every night they're having a feast. 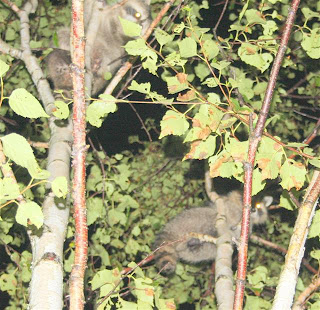 Just coincidentally - last night I took these photos of the raccoons - and I said to myself - I am NOT going to let the dogs out anymore at night so that they can chase these guys - last night Daisy decided she wanted to go out at 2am and take a dump - and also chase some raccoons.

So imagine my horror this morning when I was reading the paper - and there's an article in there about a dead dog - in my area of the HRM no less - who's died because they'd caught a disease - from raccoons. I was freaked out.

So I called a friend of mine who knows way more than I do about vaccines. I hate vaccines - Buttercup had a bad reaction to vaccinations right after I got her, so I won't have her done again - but what about the other guys? I don't want them to die, do I? But they are all getting old - and vaccines are dangerous. So here is what she said:

leptospirosis is a bacertial infection - not a parasite as the below article states. There are over 200 subgroups of it - and the vaccine only covers a couple types of it. Canine infectionsof it are extremely rare, it's incubation is 4-12 days and it needs to be transmitted by skin, mucus membranes, or urine (hence why it goes through shelter situations so quickly). It pops up mostly in the summer and fall and is treated with fluids and antibiotics.

I've decided to talk to my neighbours as soon as I get home from work tonight and ask them to start dealing with their garbage a different way - try and keep the raccoons away instead of vaccinating the dogs - and also tell them that this disease can be transmitted to HUMANS - they have 2 11 year old children who play constantly in their back yard. Maybe that'll scare them enough to do something about it. And maybe also they're a bit tired of my dogs barking like crazy every night when they're out in the backyard "playing" with the raccoons. 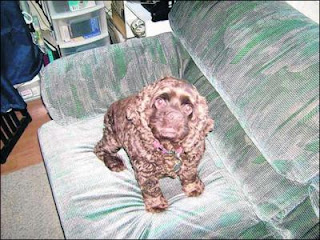 Benson, a six-year-old chocolate cocker spaniel, died of leptospirosis, a parasite that’s found in the urine of racoons and other animals.

Pat Skeir says a disease found in raccoon urine put her dog through a slow and painful death.

And now she’s worried that the provincial Natural Resources Department isn’t doing enough to control raccoons that are threatening other pets in her Halifax neighbourhood.

"It was such an awful death for him," Ms. Skeir said in a phone interview Friday. "He had so many things wrong. He stopped eating. He just wanted to lay there."

Ms. Skeir’s six-year-old chocolate cocker spaniel, Benson, got sick in May. The friendly dog with a fondness for chasing squeaky toys down the hall suffered from yellow eyes and gums, an enlarged spleen and liver, and his kidneys were working at just 20 per cent.

But when Ms. Skeir told the vet about the number of raccoons in her Cowie Hill neighbourhood, a new batch of tests was ordered up.

Those tests, received after the dog died, showed he had a disease called leptospirosis. It’s found in the urine of rats, skunks, raccoons and other animals.

"The area I live in is totally infested with raccoons," Ms. Skeir said. "They run along the fences, they’re in the garbage . . . they’re in your yard, they try to dig up . . . plants.

Cases of leptospirosis are rare in Nova Scotia but more common in other parts of North America.

"Leptospirosis is a parasite," said Halifax veterinarian Eric Carnegy, who runs a Clayton Park clinic. "The most common cause is wildlife urinating and getting into stagnant water, and then a dog coming along and drinking that water."

Although sometimes no symptoms are shown if only a small amount is consumed, at other times the parasite can beat antibiotics and "it can actually go in and affect the liver and kidney," he said.

Dr. Carnegy was Benson’s doctor. He said Tuesday that the dog died of leptospirosis.

"What we found is that the liver enzymes were right off the scale," he said. "The dog started to go jaundice."

Dr. Carnegy normally sees about three or four leptospirosis cases annually, but he said Benson is the first this year. He said vaccinating your dog decreases the risk, but it doesn’t cover all strains of the bacteria.

"You have to look at the risk factor of your own dog and decide whether you want to vaccinate or not, or keep the animal on a leash . . . so you know what they’re getting into," he said.

"Ms. Skeir called the Department of Natural Resources to tell them about Benson and the plague of raccoons in her neighbourhood. She said the department told her she would have to rent live traps if she wanted to get rid of the raccoons. If she caught one, she would have to take it away and release it herself.

"Why would I do that?" Ms. Skeir said. "These are not tame animals. They’re not supposed to be here in the numbers that they are."

"We get calls about raccoons all the time," she said Tuesday morning. "What a staff person would do is offer advice, depending upon the information that they receive."

Ms. Towers said staff members help callers identify whatever may be drawing animals to the area, such as garbage or pet food, and then advise them to remove the attractant in hopes of solving the pest problem without harming them.

"Our first advice always is to try to make it as easy as possible for animals and humans to co-habitat," she said. "If they really want the animal removed, then . . . people have the choice of trapping the animals themselves."

That probably means borrowing or renting a live trap from a private company, Ms. Towers said. But there is another option, she said, and that’s hiring a department-licensed nuisance wildlife operator.

"They’re certified to catch the animals and they charge a fee," Ms. Towers said "We make those names available if people are looking for someone to do that."

She said the department itself won’t take care of the critter unless it’s sick, injured (such as in a collision) or "acting quite differently," which means it may displaying recognizable symptoms of a wildlife disease.

In Ms. Skeir’s case, she said "even if it is a confirmed diagnosis (of) leptospirosis, the sources of that are numerous," Ms. Towers said. "It may or may not have been the raccoons."

Since Benson’s death, Ms. Skeir gardens with her gloves on. She’s also worried because there are children in the area. "How many animals might have died and their owners thought, oh they must have caught something?" she said.

KEEPING CRITTERS AWAY
Natural Resources may not be getting many reports lately of wild animals with leptospirosis, but the provincial department said Tuesday distemper is definitely a problem among the growing raccoon population.

The department describes distemper as a viral disease affecting the respiratory and central nervous systems, adding critters become lethargic, not aggressive, as a result and may suffer from seizures.

Here’s how officials say you can deter wild animals such as raccoons from coming near your home:

•Keep pets indoors or on a leash.

Owners who don’t control their pets properly are subject to fines under both the provincial Wildlife Act and municipal bylaws, the department said.
Posted by Joan Sinden at Wednesday, August 13, 2008