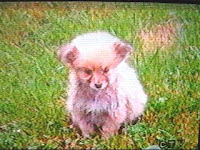 Gail Benoit was on the news tonight again because someone else - Sandy Redden - has come forward because she spent $650 on a pomeranian puppy that died 24 hours after she bought it from Gail Benoit. This afternoon she went to the NS SPCA head office in Bedford to tell her story, and they've sent his little body off to PEI to have an autopsy done. There's also 5 other little puppies who they are having autopsies done on - and one little guy who's on life support over in PEI right now.

CTV news have their big guns on this story - Rick Grant - so I hope they keep on this. It would be nice to get some video of Gail and or Dana Bailey spitting at the camera or going off at a reporter. That would be lovely - the camera loves that kind of stuff. It would really show what kind of a professional puppy broker she is.