What's the difference between litter and poop?

This week in the Chronicle Herald there was an article about the problem with litter on the highways, and really - litter in general, in public - in Nova Scotia. It was written by the same staff reporter - Patricia Arenburg, who also did the article about the poop in the off leash parks in Halifax and how that is potentially going to shut down access for dogs and their owners to off leash exercise in the HRM.

When I was reading the article, it suddenly struck me - what's the difference between litter and poop? You can't assign a demographic to blame - and you can't punish that demographic for the consequences of their action (or inaction).

When the public at large litters - the government really can't do anything about it except to say "PLEASE, pick up your litter."

But when a very small amount of irresponsible dog owners don't pick up their poop in a multi-use municipal park the government can then punich ALL dog owners and shut down those parks to ALL dog owners forever.

Here's the article from the Chronicle Herald about the littering - compare it to the article a couple weeks ago about the poop littering (which I've pasted directly after the below article)and see if you can see the similarities:

Parent Pleads for an end to the litter 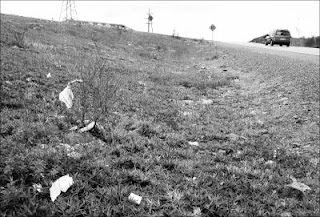 Mom was right: She’s not your maid, and neither is the Nova Scotia government.

"The government is not your personal cleaner," Environment Minister Mark Parent said Tuesday.

"Is picking up after the few a good use of tax dollars at a time when we’re wrestling with climate change and a host of other environmental challenges? I think not."

Speaking at a news conference before a cleanup of the Sackville River bank, Mr. Parent said he snapped a series of pictures during a drive to Cape Breton earlier this year. In one photo, he showed reporters a sofa, a toilet and even a kitchen sink that had been left by the road.

Barry Renouf of Moncton has counted 95 "trucker bombs" — plastic bottles filled with urine — tossed along the 260-kilo- metre route that he regularly takes between Dartmouth and Moncton. The mess this spring prompted him to send an e-mail to the premier, asking whether they were some sort of tourism promotion.

"This is news to me that this is happening, although the other day I noticed five containers by the side of the road that looked like they were plastic bottles of some sort, and I wondered if maybe that is what they were," Mr. Parent said.

He said it was difficult to catch offenders and prove a littering case in court, adding that it was an expensive process. But he encouraged anyone who sees someone disposing of "trucker bombs" to contact the department immediately.

"We will find them if we can catch them, but what I’m hoping to do is give them the message: Don’t do it. Think about what you’re doing. Think about this Earth as your home and take care of it," Mr. Parent said.

When visitors to the province’s "world-class waste management system" look around and see the litter, he said: "I wonder if they go home and say: ‘Nova Scotia’s landfills are great. Their recycling program is the best in the country but their roads and streets look like dumps.’ "

Litter across the province "hurts our image, it hurts the economic efforts we’re making," he said.

And the reason for all this litter?

Before most reporters arrived, the minister pulled a Nova Scotia Youth Conservation Corps brown T-shirt over his blue dress shirt and rolled up the sleeves. He replaced his dress shoes with a pair of black rubber boots and shook hands with the youth staff and members of his own staff who joined the cleanup efforts for the media event.

Mr. Parent’s department is starting a $130,000 ad campaign targeting litterbugs, and he announced a one-time injection of $50,000 to hire seven more garbage pickers for the conservation corps. This summer, 12 people between 17 and 24 will hit the province’s roads to clean up after Nova Scotia litterbugs for the corps.

"The majority of Nova Scotians care, but there are a minority who are causing a blight on our landscape and it has to stop," Mr. Parent said. 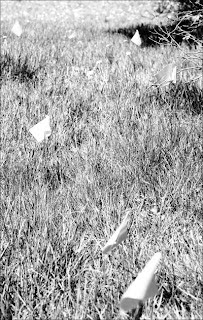 Lax Poop-Scooping has off leash privileges at Risk

If dog owners don’t clean up their act, off-leash parks may be off limits to the city’s canines.

A recent survey for the scoop on poop at three designated off-leash areas called Seaview Park "simply disgusting," and the results were "disappointing" at Point Pleasant Park.

Fort Needham Memorial Park had also reportedly gone to the dogs, and even though a pack of dedicated park users quickly cleaned the mess, that may not be enough to save this puppy playground.

"Losing Seaview would be just a massive blow to the dog community in Halifax," dog owner Marc Boutilier said.

Mr. Boutilier drives to the park from Armdale at least three times a week so his 34-kilogram Labrador retriever, Jenny, can run and play with her four-legged friends.

He admits it’s impossible to keep the park poop-free, but said pressure from regular park users makes other owners clean up after their pets.

"In all the years I’ve gone there, I would never consider the park disgusting," Mr. Boutilier said.

But Halifax’s off-leash strategy committee says that on April 29, it left over 200 flags to mark the dog waste that littered Seaview Park’s playground, bushes, gardens and grass.

"It is evident that many dog owners using this park are not behaving in a responsible manner," the committee’s cleanliness monitoring report states.

The problem is so serious that "if dog waste continues to be a problem at Seaview Park, the committee may decide to consider revoking dog-related privileges in the park," which it can do under the city’s off-leash strategy. The strategy was developed in 2007 with the help of local dog owners.

The committee also left over 125 flags at Point Pleasant Park, along Lodge Road and Cambridge Drive, on April 18 and 19. The report said most of the poop was within a few feet of the trails. Dog owners voluntarily cleaned up some of the waste, the report said, adding that park staff would have to bag the rest because there was "much more to be removed."

Another 80 flags were left on April 26 to mark Spot’s spots at Fort Needham Memorial Park. While surveyors marked the territory, a dog owner arrived and started scooping. She told the group that she would contact park regulars and have the park cleaned up that day, the report states. The mess was gone when the group inspected the site on April 29.

"It is evident that there is a dedicated and well-organized group of dog owners who regularly use the park," the report states. "It’s unlikely that they are not picking up after their dogs, but it’s also apparent that there are regular park users who are not responsible pet owners."

But the report didn’t let Fort Needham off the leash. The committee said it would monitor the parks again for another month, and if the poop problem continues at Fort Needham and the two other parks, the group may shut them down.

Mr. Boutilier, who was at Seaview Park shortly after the flags were placed, said he didn’t see any dog waste at a number of the flags he saw that day. He said the poop problem is "inflated."

"I wouldn’t go there if the problem was as bad as they said," Mr. Boutilier said. "If it was as bad as they claimed, you wouldn’t be able to walk two feet without getting it all over your shoes. I can easily say in the past year, I haven’t stepped in any."

City Threatening to take away off leash parks

What to do about the poop problem

What's the difference between poop and litter?

Further on my off-leash diatribe
Posted by Joan Sinden at Friday, June 06, 2008