So me and Charlie went to the Lab Fest being put on by Trish Pittman and Lab Rescue of Nova Scotia, and let me tell you - we were NOT disappointed by the amount of Labrador Retrievers at Seaview Park this afternoon!

This matching pair of german shepherd mixes however still managed to have fun even though they didn't match all the lab mixes - their owner said he had to keep them away from the melee because there was a weiner dunk going on and these dogs would have tried to get every weiner going - they certainly look like the type who like to have their fair share of hot dogs!

Charlie was too interested in smelling and rolling in dandielions to care about hot dogs - although he DID go over to the group to get his share of cake that came from the Doggy Treat Bakery - which is owned by Trish Pittman up in Enfield. Charlie LOVED the sweets!! 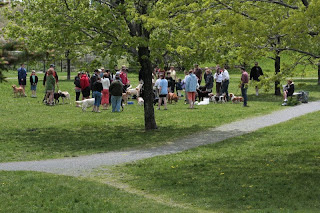 Here's a long shot of the group - isn't it nice when you see a big group of humans and dogs just hanging out together and having fun? I think it's a beautiful site! 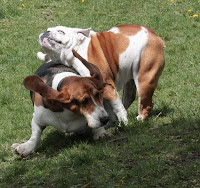 These next photos are of the cutest english bull dog and basset hound in the world! They decided to play with each other right in front of me - what else could I do but take photos of them? I was choiceless!

These last 2 photos are of the famous "poop" flags - put there by the bureaucrats at City Hall so that they can close down Seaview Park to dog owners and their dogs. I looked at a lot of the flags, and for the life of me - I could NOT find any poop at the bottom of the flags. Maybe I'm not good at seeing month(s) old poop - but I really do not understand how these flags can close down a many year park access area to dog owners. I think it's actually - actually I don't have a word for it - it makes me so sick.

Here's a photo of Charlie taking a dump amidst the dump flags. I picked up his poop after he was finished (like any responsible dog owner would).
Posted by Joan Sinden at Sunday, May 25, 2008