An Amazing story about a dog from Mongolia

Sometimes we hear about people adopting dogs from other countries and we don't like it, because there's so many dogs here who need our help - but then sometimes we hear stories like this one - I think that fate really does come into play for some animals and humans - Brownie was meant to be found by some American and saved so that compassion could be taught to a lot of people.

Hi,
So, I am sending you this E-mail because I feel it is:
1. really uplifting and happy and wonderful (yay) and
2. really important.
Please take - I don't know- 20 seconds to read this.
I found a paralyzed dog in Mongolia. Local street children beat her with a bat until they broke her back. She had no hope of regaining movement below the waist, and she was going to be euthanized; many people tried to discourage me from attempting to save her.
Long story short, I raised the money to save her and fly her home (the US has no animal quarantine laws), and she is now in a temporary foster home here in America.


Here she is six weeks ago in Mongolia, the day I found her: 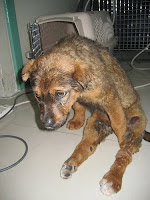 And, here she is now 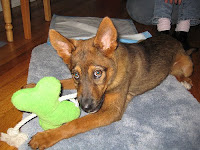 Though the vets said she would never be able to feel or move her legs again, she is now not only walking, but running!

I can't tell you how many people told me there was no hope, to just "give up".

I hope that someone, somewhere, might remember this and one day help another "hopeless" case, be it animal or person.

Regarding animals abroad, lots of people see animals in need when traveling and think there is nothing they can do. There are always vet offices that can help. And, though not always the answer (dogs are not pets in Mongolia, and a paralyzed street dog would have perished in days), it is remarkably easy to bring a dog to the US.

PS: If you are interested in more about Brownie, below is a letter about her first day in America. 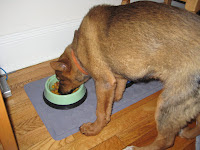 The message below is from Brownie's foster Mom...

Thanks for your note! Brownie is way better today than she was yesterday. But then I don't think I would've been too chipper yesterday, either, if I'd flown from Mongolia to Seoul, then Seoul to JFK, all while traveling in the cargo hold. Actually, she had a great day today. I took her to PetSmart this morning to get some food and stuff, and although at first she was hesitant to go in, she ended up LOVING it there. She was very well behaved, but I sensed a kid-in-a-candy-store phenomenon going on in her little puppy mind. And everyone who crossed her path fell in love with her adorable face and her very waggy tail and, most of all, her sweetness and her affectionate nature. She really is a doll.

I met a woman in PetSmart who's a manager at one of their stores in CT, and she couldn't tear herself away from petting Brownie (who was very accommodating, and rolled over to allow full access to her belly--right after she peed on the floor a little further up the aisle). I apologized about the pee, and the woman said, "Please--I've never seen a dog that DIDN'T pee in here!"

Anyway, yada yada yada, I was standing outside the store talking to Ms. Brown (the person), who suggested that I attach the leash to a harness rather than to the dog's collar to offer a little more support while she walks, and four employees ended up choosing a harness for her, bringing it out to us and fitting it to her, and then not charging me for it because they loved Brownie so much.

I also took Brownie for her vet appointment this afternoon, and everyone in the waiting room was asking me all about her. She's a total people magnet! I haven't seen any evidence that she's afraid of men (though she ought to be), or kids (ditto), or dogs twice her size--she loves everyone, though I noticed she did lure in a few big dogs with her charm, then nipped at them when they were right in her face. The vet looked at the X-rays from Mongolia after examining Brownie (rather than beforehand), and said that given the severity of the spinal injury, the prognosis for Brownie could not have been good AT ALL, and that the fact that she's walking now is an absolute miracle.

In between PetSmart and the vet, I brought Brownie to my house in Hastings, and she kept me company while I was doing a little project. I'm not sure she'd ever seen grass before, as you mentioned the other day. Since she can't climb steps, I walked her the long way (via the lawn) to my front door, and I'd describe the way she got from the driveway to the house as nothing short of a joyous scamper. I couldn't believe that she was not only walking beside me on a leash, but almost running due to sheer excitement--and she didn't fall over at all. For a moment I forgot that this was a puppy that was once expected never to walk again.

Ever since we got home this afternoon, she's been snoozing off and on--but mostly on--in a little puppy heap. Today may have been one of the busiest, happiest days of her life, and she deserves many more.

Also, remember that striped knit scarf that was in her carrier? I washed it with some other stuff, because I thought maybe the vet staff had Brownie travel with it because it was special to her. I put it down next to her while she was napping earlier, and the next thing I knew, she was sleeping under it and on top of it and next to it. She seems to really enjoy it.
Posted by Joan Sinden at Thursday, May 29, 2008

Email ThisBlogThis!Share to TwitterShare to FacebookShare to Pinterest
Labels: other people's dogs, Veterinarians