Daisy Goes to the Vet! 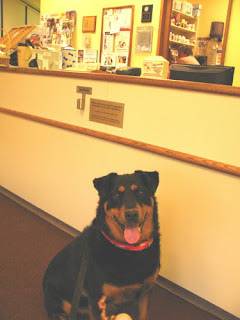 Today Daisy went to the vet - she has had a growth growing inside her right eye lid - and I'd imagine it's starting to get uncomfortable - so we went tonight to see about getting it taken off. 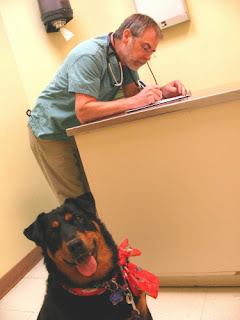 Since she's having that one taken off I'm also going have about 5 other cauliflower like growths taken off from other parts of her body too - I can't see that they'll stop growing - so I might as well have them taken off while they're small rather than letting them grow big and ugly, and they seem to be sensitive when I touch them - so we're going to have the lot of them taken off. Dr. Carnegy had a cancellation this coming Friday - so we're going to have it done then - nice and soon! So after Friday Daisy will be perfect again! Daisy was of course perfect at the vets - doesn't she look cute in these photos? It's the power of the liver! haha! 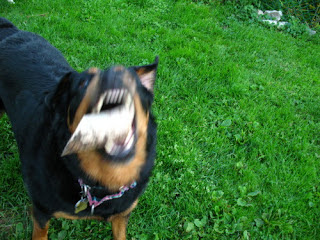 Once we got home Daisy pulled out one of her bones right away and dug right back in. 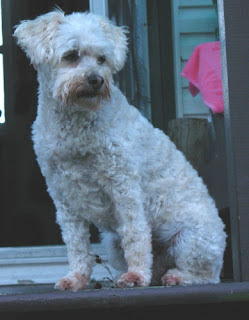 Buttercup was very unimpressed that we went out without her - my Dad said that the whole time we were gone she did nothing but whine - and then after we came home she let me know in no uncertain terms that she didn't like being left behind. 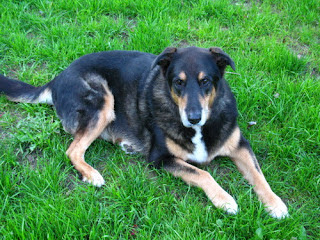 Charlie too didn't like being left behind I think. But sometimes we don't have any choice, do we? It's the curse of the multiple dog home. Sometimes we have to go our separate ways. 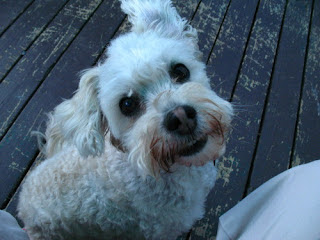 I think that Buttercup "may" be starting to forgive me now that we've been home awhile. Maybe if I dole out obsessive amounts of liver all will be forgiven....
Posted by Joan Sinden at Monday, September 17, 2007