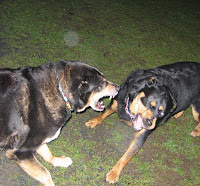 on my blog - and I've got to say I got one hell of a dig in yesterday.

Yesterday afternoon my Dad and me were out in the backyard when we saw 2 police cars pull up out in front of the house - and I was like - "what in the hell is going on?" - and the police people went into the house next door to me - the house that I've been having all the troubles with - the old lady who's been screaming at me about the fence, and taking away her 3 feet of property, the son who threatened to shoot Daisy, the woman who said that Daisy attacked her dog and "tore her dogs ear off" - even though when Animal Control visited a couple days later to document the case - at their calling - there were absolutely no marks on the dog - it was THEIR house the police people went into yesterday.

So a short time later - what do the police people come out of the house with? A honking huge GUN! They put it into their vehicle and go back into the house and stay there for a little while. They never take anyone away, but they certainly did take away the gun.

So after the police leave, my Dad and me and all the dogs are out in the backyard again. Charlie has taken to barking at one of the a**holes who lives in the house next door - and the guy has taken to shouting "shut up" at the top of his lungs at Charlie - and you can guess what this does to Charlie.

So yesterday the guy hollers over to me - if you don't make your dog stop barking - "I'm going to call the cops."

To which I say "they won't come for something like that - they only come for things like REMOVING GUNS FROM PEOPLE'S HOUSES".

That shut him up pretty fast.

That was the best comeback ever - especially since when I sent the police to their house they had adamantly said they didn't have any guns - because of course one of them had said to me "I've got a shot gun that will fix your dog up right". I hope that's the only gun they had.
Posted by Joan Sinden at Saturday, September 08, 2007

Email ThisBlogThis!Share to TwitterShare to FacebookShare to Pinterest
Labels: My Backyard