Martinique Beach & How the Dogs are Doing 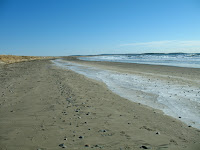 Martinique beach yesterday was a lot of fun - it's a lot closer to Halifax than I thought it was. I thought it was farther away than Clam Harbour beach is - but it's in fact closer. It's only 12 kms past the end of highway #7 - which makes it only 20 minutes further away than Conrad's beach in time terms. It took me an hour to get there from Spryfield - and it takes me 40 minutes to get to Conrad's beach so really, I could go to Martinique beach more often.

But I think that Martinique would only be a winter or a shitty day beach because any other time there'd be children or sun bathers there because it's a very nice beach. It's really long though - so it could accomodate a ton of people. When I was there yesterday I counted 12 cars - and that was spread out over the whole beach - and I didn't run into one other person. At the same time of day there'd probably also be 12 cars at Conrad's on an equally sunny Sunday - and you'd run into a lot of dog people. Which means I personally would NOT go to Conrad's on a sunny Sunday! haha!

Talking about off-leash stuff - I didn't make it to the HRM's off-leash strategy workshop tonight for the Chebucto area. I came home from work, walked the dogs early, gave them their supper, had a 20 minute nap, got all my shit ready, put my coat on to go - opened the door - and Buttercup rushed the door and I looked down and her teeth were chattering and she was pleading with me to not leave her or to go with me wherever it was I was going - and there was no way I could take her with me where I was going.

So I closed the door, put my knapsack down - and picked Buttercup up.

Which leads me to my next subject - how the dogs' are doing.

The Sunday after Teddy died my animal communicator friend Maggie Carruthers came over and stayed for quite awhile because we both knew that the dynamics in the house had gone right to shit and all the dogs had become cumulatively effected by Teddy's behaviour over the last year-and-a-half.

Maggie said that Charlie was very sad - she didn't really elaborate on that, so I don't want to put too much into that - but I think he's sad because he hasn't gotten the attention that he needs and there's nothing he can do about it. Daisy is always closed off to Maggie for some reason - probably because her first 3 years were just so full of turmoil and abuse, Daisy just can't open up yet. Buttercup though - has lost faith in me - she's put up a shield around herself and I've got my work cut out for me to build our relationship back up again. She doesn't trust me anymore - she doesn't trust that I'm not going to leave her.

And that just kills me. She used to get this look on her face when I was fussing with Teddy that would break your heart, and it kills me that I have damaged our relationship. My relationship with her is one of the most important things in my life - more important than the issue of off-leash activities in the HRM unfortunately.

So I'll go to the workshop this coming Saturday instead. Instead we went to Value Village and walked around for a little while. I think Buttercup really appreciated it. I certainly felt better. 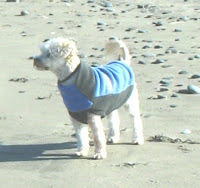 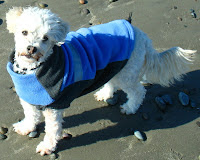 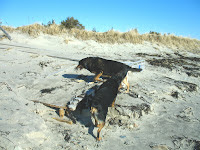