My Dad is the Greatest Person Who's Ever Lived - And Why 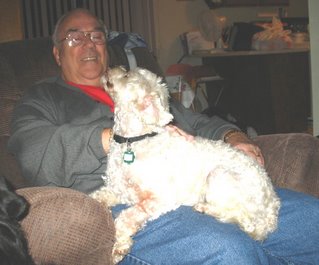 I have decided that my father is the greatest and gentlest and most kindest and most compassionate person who has ever lived and he has no idea that he is, and he has no idea why - but he is, without a doubt. It has just come to him naturally, he hasn't had to learn it, but somehow he was able to teach it to me without him having knowingly been taught it himself, and in fact I think he's been embarrassed to have felt this way about things most of his life.

I finally clued into it a couple days ago and when it did it hit me like a ton of bricks. Every once in a while he tries to teach me "life lessons" even though I'm 40 years old now - I still really do need them - ESPECIALLY from him! And a couple days ago the conversation came up again about dying pets (thank-you Marc) - and he said - "you know Joan, you've got to prepare yourself for when your own pets start to die".... and he started to tell me a story -

He started to tell me a story about a little dog when he was about 12 years old and on his family farm in Ontario - a little Jack Daniels dogs - oh right - a little Jack RUSSELL dog.... it was the cutest thing, and a great hunter, and he really loved that dog. And one day he got hit by a car and broke one of his back legs and my Dad can remember it like it happened this morning - the little dog being behind he barn and his brother Irvine getting one of the neigbours to come over with his rifle and right there behind the barn - they shot the dog dead - right there - right in front of my Dad.... and all of the sudden my Dad didn't say anything - and I could tell that in his mind he could see that little dog that my Dad had named "Bob" - and he could see that one second that dog was alive and then the next second it was dead. The neighbour had shot it dead. And that 12 year old boy didn't know what to do, because he loved that dog.

But I think that Dad even then had a love for animals that elevated them above "livestock" levels on the farm. And that's why to this day he still remembers Bob being shot because his leg was broken when he got run over by a car. I mean - he was such a good dog. He was able to see that Bob actually was a sentient being - and I don't think my Dad actually realized it - that Bob was a living, thinking, feeling being. Because even if my Dad didn't realize it - that was what he taught me. Everything that I've learned about animals - I've learned from him - and since he told me the story about Bob the Jack "Daniels" dog - I think it may have started with him.

It's like when I was a kid - my Dad and I used to go fishing - but we never caught one fish - because my Dad could never fathom the idea of hitting a fish in order to kill it once you've reeled it in. So I have never caught a fish in my life. But on the other hand - he used to grow his eye brows really long so he could intimidate the hell out of the HUMANS in the medium security prison he worked at - now THAT I LOVED! haha!

I am the luckiest person in the world to be able to spend time with the Greatest person who ever lived. And to also have the best dogs in the world. What gravy.
Posted by Joan Sinden at Friday, December 01, 2006