If you're planning on walking in the woods with your dog - carry wire cutters! 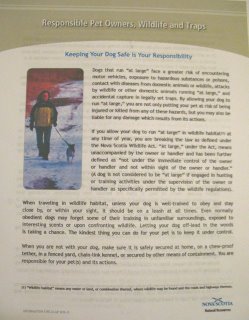 I got forwarded the document today - "Responsible Dog Owners - Wildlife and Traps" - a brand new document put out by the Department of Natural Resources, and it makes for some really interesting reading. It's an 8 page pdf document that outlines regulations - some of which are new - in regards to what's legal for trappers in Nova Scotia, and what rights property owners have in regards to traps being set on private property - and also what responsibilities dog owners must take on when walking their dogs in the country in this province - which we must do if we decide to take our dogs off-leash in unfamiliar territory in the months between October and March every year when it's legal to set traps.

I have to say that I think the province did a pretty good job overall - I think it should make people on all sides pretty happy. Trappers MUST put identification on traps saying who owns the devices so that they can be identified - that is a huge thing.

"Landowners have the ability to restrict trapping on their forested land by means of posting a sign stating trapping is prohibited without permission" - WOW. Before, trappers could put traps on people's private property without their permission and it was perfectly legal. So this sentence is a huge step forward for landowners who own forested land and walk their dogs on that land - they can now feel safe with their dogs on at least their own land. This to me is a huge step forward. 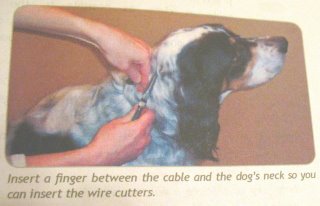 The document is also very helpful for dog owners for several reasons in that it has a big section on "the best way to keep your dog safe" - it has a section on how to remove your dog from several types of traps should they get caught in one when you're out walking in the woods. So this page could actually save your dogs' lives - along with a handy pair of wire cutters - so if you go into the woods this winter - you should carry the Department of Natural Resources document and a pair of wire cutters in your first aid kit - it may save your animal's life.

So in other words - your dog does NOT have to on leash in order to be considered not running at large - he just has to be in your view and under your control. You are not breaking any laws when you are outside a provincial park when you have your dog off-leash as long as they are under your control and in your sight. Isn't that a fabulous thing to know? I think that is absolutely fabulous!
Posted by Joan Sinden at Thursday, October 19, 2006