What would YOU do with your lifetime of experience? 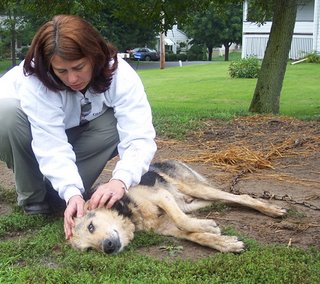 Imagine that you had an eccentric love for old wooden rocking chairs. You knew what all the many and varied styles there were - and there's a ton of them - windsor, shaker, adirondack, empire, canadian - the list is endless. You can spend countless hours lovingly restoring chairs that you've found in other people's garbage and at yard sales.

People think you're crazy for wasting all that time and money on those stupid things - but you see the innate beauty in them. Each one is special and says something to you, and you've never regretted a moment, or a penny that that's gone to them.

You'll even admit that some of the chairs in your collection have come from people's backyards. They were just rotting away back there - so obviously the people didn't want them, right? So what if they were somebody else's property. The people probably didn't even notice they were gone - and if they did, they were most likely happy to see the garbage gone. It's kind of embarrassing to have garbage laying around in your backyard anyway - it brings down the neighbourhood.

Now imagine for a second that instead of a rocking chair - what is in that same back yard - is a dying dog. It's still property. There's no difference in the eyes of the law between a rotting rocking chair and a dying dog. You can be arrested for both.

This week - Tammy Grimes, founder of the multi-nation organization - Dogs Deserve Better - an anti-chaining group - was arrested in Altoona Pennsylvania - because she received a call about a dog that was dying in someone's backyard. He had been chained there his whole life - abandoned there, and he was dying. And could she please save this dog. And Tammy did something. She saved him. And she was arrested by the local law enforcement.

Previous to her arrival the local Humane Society had been called several times, the dog's owner had been pleaded with to take proper care of the dog - all the proper avenues had been walked - and still the dog lay dying in that back yard.

His name is Doogie. And it's his picture at the top of this post - with Tammy Grimes. It was Doogie's human neighbour who called Tammy for help. She couldn't stand it any longer after trying everything else she could think of - and she called the one person that she thought would not walk away from this dog. Who would realize that this is an actual living, breathing being. Which Doogie is - who deserves to at least have - hopefully - a few days, or weeks - of unconditional, indoor love.

So Tammy did the thing that she knew was going to have the worst consequences for herself - and the best result for Doogie. She picked him up off the ground he was dying on - and she took him to a veterinarian - perhaps for the first time in his life - and saved him.

We have ALL walked by too many things in our life that we later wished we'd have saved. We regret our non-action. There are some people in this world who have done that one too many times and have decided that they will do that no longer. Tammy Grimes is one of those people.

I have been in awe of her for several years now and I continue to be. Her actions this week with Doogie are heroic and she should be treated as a saviour - not as a villain.

Doogie is NOT a rocking chair. He is NOT a piece of property. He is a living, breathing sentient being that was abandoned and tethered in a mud pit and left to die. He was suffering, and now he's not. Thanks to Tammy. Thank-you Tammy!

You can view video of Doogie before Tammy rescued him at http://www.youtube.com/watch?v=YN9t1rv4pj4 - the crying you hear in the background is the neighbour that called Tammy

You can view video of Doogie after Tammy took him to her house - http://www.youtube.com/watch?v=j8wxGP1N7QQ

A page for updates is on the DDB site at http://www.dogsdeservebetter.org/doogie.html 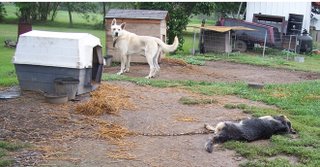