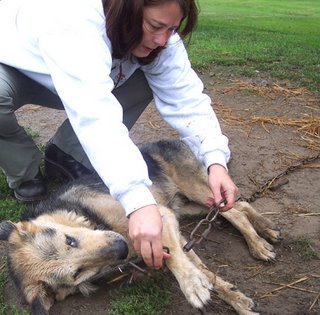 Dog people are weird. They really are. I have no idea why. For some reason when you need the support of your compatriots the most - that's the time that the worst back stabbing will happen. You can almost set your clock by it.

And so it's happening with the head of Dogs Deserve Better Tammy Grimes. All kinds of questions are coming up surrounding her saving the dog she named Doogie last week that I wrote about a few days ago - and I am going to write here tonight to set my mind at ease and answer the questions because I believe in Tammy and the organization 100% and remain unswayed by the nay-sayers.

First and foremost I'd like to say - shame on anyone who'd slander and talk down a lady who's life has been completely dedicated for the last five years to saving the lives of chained and tethered dogs. Her house has been completely dedicated to fostering and rehabilitating dogs that have come to her - she even took in with no questions a blind formerly chained dog that I found in West Virginia who turned out to be a complete love bug who would have otherwise died in a shed if it wasn't for Tammy. She also went down to New Orleans last year and helped with the dogs and the recovery for 2 weeks and lived in a tent because she felt it was her duty to do that - just like every rescuer felt like it was - but she actually WENT AND DID IT.

So anyway - on to the allegations and my disproving of them - there were 3 dogs on the property that Tammy went to - why did she only take Doogie? Well - Doogie was the only dog who was dying - and Tammy is not a dog thief, is she? So why would she take the other 2 as well? She's not in the habit of stealing other people's dogs - that's why she left the other 2 I'd imagine. They were not in dire distress - they were not DYING.

The Freedom Police says that they were not contacted by Tammy before she took the dog. When you have issues about neglect and dogs - do you call your Police department? No, you call your Humane Society. So that's why no calls were made to the Police department. The Humane Society WAS called - by the neighbour of Doogie's owner - and the calls went unanswered. The Humane Officer was found - when they took Doogie to the vet - and Tammy tried to turn Doogie over to him then - and the Humane Officer refused to take him then - he said to have him seen to medically and then to call him on his cell phone with the results. And then this whole debacle has resulted from that.

One person has reported talking to someone at the Freedom Police station who has said that Tammy was not picked up at her home by the police but did in fact drive herself to the police station and has completely fabricated the story of being driven to the station by several police cars. Well to this - all I can say is that I believe Tammy's story because she has written it quite in detail on her webpage about Doogie at http://www.dogsdeservebetter.org/doogie.html - where she says that 4 police cruisers arrived at her home at around 9:30pm to take her into custody.

I have to say that the whole time I've known Tammy she has always counselled everyone to follow the law - to never steal or take a dog, no matter what. We are not above the law. Tammy and the DDB group do NOT feel that we are above the law or arbiters of the law. I am convinced that Doogie must have been in an exceedingly exceptional circumstance.

There are our laws - but there are also God's laws. And you have to stand before both. Which ones are you willing to suffer the consequences of?

If your dog has bone spurs do you let him lay on the ground, or do you buy him a pillow?

If your dog is 19 years old do you leave him alone for 3 days in the back yard or do you let him lay on a blanket in the kitchen so that he can be comfortable in his final hours?

The problem with our laws is that it's hard to charge someone with abuse and negligence when it's actually just the way they've always treated those animals that live in the back yard that they throw food at every couple of days.

But it's very easy to charge and arrest a person who comes and takes away the animal when they see that the same animal is in severe distress and just about to die and would like a few moments of comfort and love before it does kick off and she would like to be the one who is blessed with giving him that gift. If that's a crime - shame on all of us.
Posted by Joan Sinden at Sunday, September 17, 2006