Man, I am tired tonight. This morning I went to the Pampered Paws Inn (and Doggy Day Care) charity brunch (in aid of the Animal Rescue Coalition) with a bunch of people - after becoming horribly lost as I always do, but somehow I still managed to not be TOO late. The place that the owner Wendy has built is awesome. She has a bed and breakfast for people who are travelling and want to bring their dogs with them, and she also has a doggy day care. And then periodically she puts on these charity brunches. On her website she talks about these things called "yappy hours" on Friday nights for single people where people bring their dogs to socialize - but I didn't ask her about that today...I should've asked her about that though! haha!

One REALLY neat thing she has is an ice cream stand - and she's got several flavours for dogs! So it's worth a trip out on a nice day JUST for the ice cream! It's $2.00 per ice cream and there's flavours like "stinky tuna" and "peanut butter" - and several others - all made on site with a gelato machine. There's also home made gelato as well as Farmer's ice cream for humans.

She's located at 1725 Hammond's Plains Road - I was really super impressed with the place. The Halifax Regional Municipality NEEDS so much more of this kind of dog friendly service. She deserves to make a lot of money! 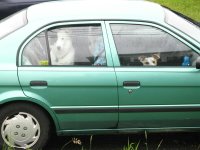 Pip and Karma say - REALLY - we're NOT too neurotic to come in and hang out with all the other dogs! We won't turn the whole place upside down and make everyone go completely crazy. Just give us a chance, coach! 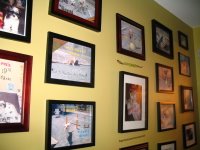 A wall of photo's of previous guests to the Inn - I guess you'd call them "VIP's"! 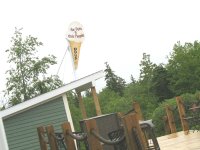 A photo of the Ice Cream shack on the side of the Inn! 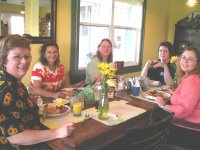 A photo of our table! 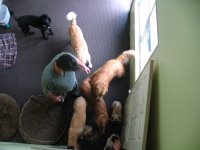 A few of the dogs who had come with their owners to partake in the activities of the brunch - the doggy day care section has a big outdoor section as well.