Make a Note about your dog's bum holes 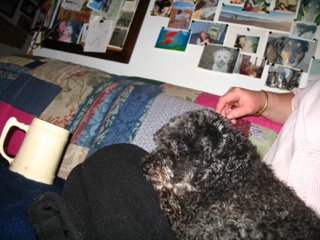 Note to self.... when given the option of having your dog's bum hole shaved as bare as a baby's bum..... DON'T have it done! It will make your dog feel very uncomfortable and confused.

Poor Teddy! Today he just will not move! He is continuing to dart from piece of carpet to piece of carpet and keeping his bum covered at all times and he won't move unless I pick him up. It might also have something to do with his diva-ness and his feeling very unwell and sick - but he'll start crying if I leave the room without picking him up.

Charlie's rehabilitation vet Robin Boutilier came over tonight to give him acupuncture and we went out on the deck to do it and I had to come back inside to get Teddy because he wouldn't come outside on his own. What a poor little poodle he is, isn't he? 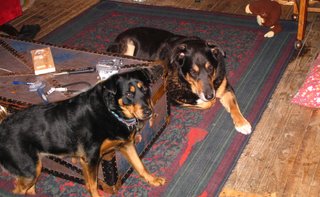 Charlie has had a bit of a set back - I think I've been walking him too much - so his leg has swollen up on the inside. The outside of his leg looks good, but the inside has all swollen up. I'd been walking him more the last couple days - for 20 minutes on leash around the neighbourhood - because his muscles on the back of his leg look like they're really atrophying - and that's really scaring me. But Robin tonight said that we can work on that later. So I need to back off with the walking and ice down his swelling and give him some aspirin. Poor Charlie. I need to get my mojo working on him some more. 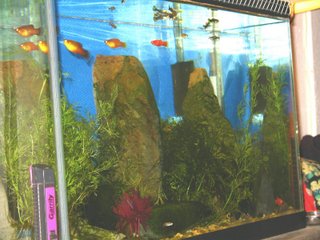 On a completely other note - I finally got a lifelike picture of my fish tank tonight - so here it is..... ta da!
Posted by Joan Sinden at Wednesday, June 21, 2006