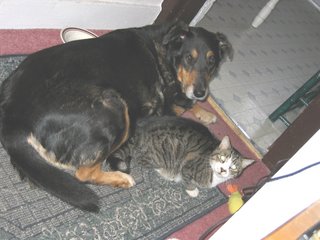 Don't tell anyone - it will lower Charlie's street cred amonst his dog friends - but his longest life friend - besides his sister Leonard - is Liam - the rat bastard cat. They've been together Charlie's whole 7 1/2 years, and I don't imagine he'd like it if he knew I was telling people that.

They usually will snuggle up together when they're waiting for supper - like they are in this picture - and probably in the below picture. In the 3rd picture - all of the house animals at the time were on the bed with me - Charlie, Leonard, Liam, Liam's brother Noel - who died of a long-standing urinary infection, and Cuddles - who died after having been found a month after being hit by a car. Very sad story that can be read on the cats page at my "Charlie loves Halifax" website.

Anyway - I took this picture last night while they were waiting for their supper and I thought I'd expose him once and for all for the good of all dog-dom - so that other dogs would know that it's okay to love a cat. You can still chase them when you're outside - outside they're still fair game! Inside they're your brother or your sister and you've got to love them - but outside it's all business! 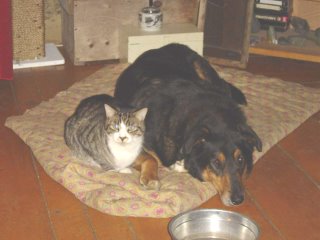 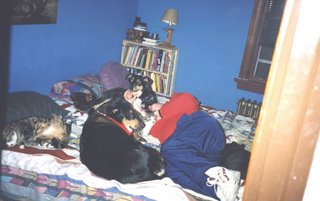 Email ThisBlogThis!Share to TwitterShare to FacebookShare to Pinterest
Labels: Whisky the cat