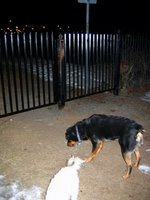 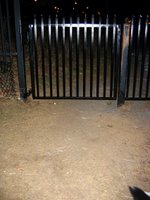 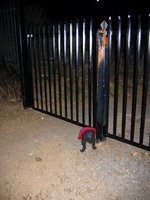 When I was at Seaview last night I noticed that there's a beautiful new fence where the wooden fence had been demolished by hooligans a few months ago. It's obviously been put up by the City because it's from the same materials as the rest of the fence that lines the whole park, and it's on a nice floating hinge, and is really really nice.

It had to have been just put up yesterday because another person who was at the park last night while I was there said he was there yesterday morning and it wasn't there then. I think it's almost worthy of writing to the city and thanking them they did such a nice job. We always write to them when anything bad happens easily enough - but when they do something good I think that's also a good opportunity to write too! Maybe it's just because I'm a loud mouth letter writer though! haha!
Posted by Joan Sinden at Thursday, February 09, 2006