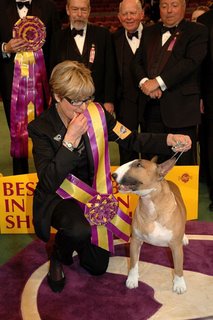 Isn't it neat that an english bull terrier has won best in show at Westminster? I think that with all the turmoil that's going on in the world with breed specific legislation currently that having a banned breed win best in show at one of the most prestigious dog shows in the world is absolutely fabulous. It really says something.

What it says, I'm not sure. I heard on the television last night that he won because his head is shaped so perfectly like an egg. What that says to me is that dog shows are all about form and nothing about function, and thus when it comes to actually living with a dog from day to day - having a pure breed dog over a mixed breed it makes no difference whether he's a Westminster winner or a shelter dog - because if his head is egg shaped or not, he can still bite the hand that feeds him all the same! I can't comment on that too much because one of my dogs bites me every day and I still attempt to love him unconditionally - it's not his fault that his life up until now gave him reason to bite people.

But anyway - it is a bit of a sad comment that the 2006 winner of the Westminster Kennel Club Show can't take his trophy on a tour of Ontario, Canada - don't you think?

There's a really neat photo gallery of the show about About.com at http://dogs.about.com/od/fordoglovers/ig/The-Dogs-at-Westminster/index.htm that I found this morning. It's VERY cute!
Posted by Joan Sinden at Thursday, February 16, 2006