When I don't post that usually means that I'm in a bad mood, or I've had a particularly nasty stretch of headaches, or something untoward has happened. This week it's been Teddy. 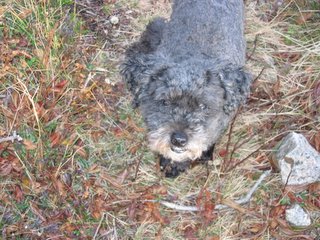 The abuse that I've meted upon him this week in the name of "doing the right thing" has set him and me back how far - I'll never know.

I believe that dogs are like humans in that they aren't naturally damaged and angry and looking to hurt you at every turn. Something had to happen to make them that way. Something had to happen to Teddy to make him want to literally kill you whenever clippers or scissors come into his range of vision - and the idea of having anything pulled over his head, or even pulled around his body - like a blanket, or even me putting him inside my jacket when he's freezing to death at the beach - makes him completely freak out. He just starts growling and tries to bite whatever's closest to him.

So as a responsible dog owner I've been doing counter-conditioning with him every day - putting scissors or clippers near him and when he doesn't react I give him a very tasty treat and when he starts to react I move them away and when he stops reacting I give him a tasty treat. Classic positive plus training. Doing that every day, in addition to one tiny little clip with the scissors gets him one treat - so that he knows that I am absolutely not going to hurt him at all.

I've been absolutely refusing to take him to a groomer because I think that must be where some of this abuse must have happened that made him this way. But at the same time, every day he's starting to look worse and worse because he's a poodle and he desperately needs to have his hair cut. So on Thursday an extra small muzzle that I had ordered came in. I thought that if I put a muzzle on him he'd realize that he was powerless and he's just surrender and give in and I could clip him.

So yesterday I put the muzzle on him. He went in to a frenzy, trying to still bite me, and everything around him. I continued trying to clip him - and he knocked the guard off the clipper so many times I just left it off - so now he's looking like a seriously maimed puppy mill dog because he's very closely shaved dog in some spots and long hair in other spots. And still I wasn't able to touch his face. Because the frenzy continued.

I thought - I'm going to continue sitting here with the clippers going because he's just going to exhaust himself and then I'll be able to finish - because this is the first and last time I'm going to do this.

He did not let up.

So after about an hour-and-a-half I turned the clippers off, picked him up - which he let me do immediately and I pulled his muzzle off. He was just shaking.

He hasn't been the same since. I think he's pretty much lost all faith in me. The picture above was taken yesterday afternoon at the beach after the hair cut was over, I think you can see the look in his eye has changed again.

I believe that we had just started to turn a corner too, and now that's all ruined. It shows you that with damaged dogs, even positive training has it's limits, and some things just can never be done with them ever again, I think.

So I've decided that grooming will never be a part of our relationship - I think Teddy is going to be one of those dogs who has to be put to sleep in order to have their hair cut. For his sake - not for the groomers sake. He just cannot handle it. Now I have to find a groomer who will do it.

And now I have to work at building a relationship with Teddy again. It's going to be a long hard road.
Posted by Joan Sinden at Saturday, November 12, 2005