Today the sky changed from grey to bright blue 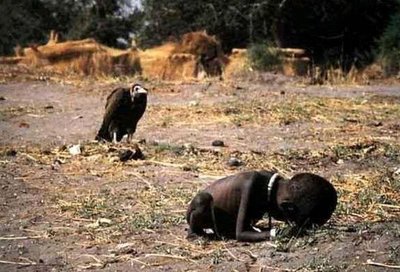 Today somehow I came across this picture. It was taken around 1992 in the Sudan by a white South African photo journalist who won a Pulitzer prize for this photo and he shortly thereafter committed suicide. This photo is a messy story from beginning to end - the starving child is trying to drag herself to a feeding station but at this point is unsuccessful. The photographer, Kevin Carter - actually sat by a tree and waited for quite a while and took a lot of photos trying to see if the vulture would spread his wings, but it never did. Kevin Carter never found out if the child ever made it to the feeding station or whether the child lived or died - but it's most likely that the child died because she was horribly close to death already.

14 months after taking the picture Kevin Carter killed himself because he couldn't handle everything he'd seen in his life up to that point - including the vision in this picture. And when I saw this photo today it really struck me because this actually happened. This little girl was actually lying dying in a field in the Sudan in 1992 all by herself with no one but a vulture and a photo-journalist next to her and she was a kilometre away from a United Nations feeding station. She was all by herself. Now THAT is loneliness. THAT is being all alone in the world. Any being alone that you or I might feel over here living a relatively established life is nothing. The gifts that we've been given in this lifetime are immense and any belly-aching should end. That child SUFFERED. I am NOT suffering. I have been given a great gift with this lifetime. That child did not. And somehow it's taken me 40 years and that photo to figure that out.

And it's only because of the vulture there that I even noticed it - last night when Maggie Carruthers was here she used a "vulture spirit" - which is a good thing - to help Teddy - and the vulture in that picture made me think of Teddy.

But some links about the story behind the picture - "the life and death of Kevin Carter" - there was also an interesting article at - http://www.diacritica.com/sobaka/2003/kevincarter.html

I don't think I'll ever be the same after seeing this picture though - it's definitely been a huge epiphany for me. It's horrible that it's taken this little child's suffering to do it -
Posted by Joan Sinden at Friday, October 28, 2005