We're coming up on the one year anniversary of finding Mrs Dingle abandoned down at the Dingle - it was last July 17th, 2004 - that she ran across the road as we were driving through the Dingle Park in the night time (my friend lives inside the Dingle park) and we knew that what ran across the road was NOT a wild rat so we stopped the car and she came right up to us and there was no way we could leave her behind for a fox or dog to catch and eat her.

Since that time I've learned a ton about domestic rats and have fallen in love with the species - and most specifically in love with Mrs Dingle and her cage mate Jada who I got from Pebbles rat rescue to be her companion. When they die though I don't think I'll replace them because dogs are my companions of choice and even though Jada and Mrs Dingle get time outside their cage - and they are very happy with their world I've created inside their cage - rats are neat, but they aren't a passion for me.

And now Mrs Dingle has suddenly developed an overnight huge new lump on her belly. It's grown since Sunday down near her groin - she's also got this thing called "mycoplasmosis" which she's had since I've had her - and it's acting up this week too - she's sneezing a lot, and she's got porphyrin literally dripping out of her right eye - you can see it in the picture below - it looks like she's bleeding out of her eye, it's pretty gross.

So we're going to the vet tomorrow. Her health has been awful since the day the I found her - Jada has been the picture of health from day one - they are yin and yang - Mrs Dingle is so loving and lets you carry her around and is actually like a pet and is always on the verge on dying and Jada is the picture of health and is as wild as you can imagine - always trying to escape the cage they're in, and not letting me pick her up or anything - but she IS mellowing a bit with age. But she's been an excellent companion for Mrs Dingle - so that's what she was meant to be.

Below is a picture I took last night - Mrs Dingle isn't very happy right now - but she doesn't feel so bad that she can't still hog all the carrots when I put them in the cage! 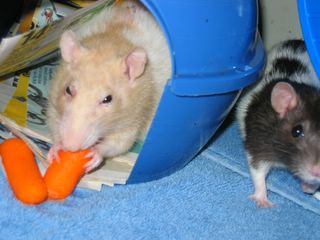