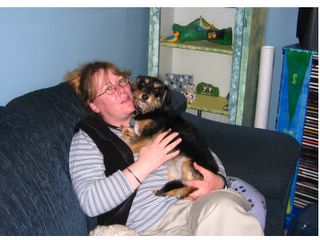 I've been in a bad mood lately because of some people's reactions to Daisy so I haven't been posting or even taking pictures I've been so pissed off. I did change the text on my Seaview park page because that's where my bad experiences have been happening and I've decided not to go there anymore.

One hilarious thing that's happened in the last day is that someone posted a comment on the blog posting that I have - I posted a pamphlet I made last year on this blog that I had been leaving copies of "dog etiquette" about Seaview park and I wrote out what the pamphlet said - and an anonymous reader of the pamphlet posted the following comment yesterday:

New dog on the block!We took our bernese moutain dog Jasper to the park.Ran into an old friend of mine.I was always leary of going ,a little nervous if there were rotties & pit bulls there.There weren't any rotts there,but a couple of pit bulls.I must say ,we were impressed and all dogs were under control.Jasper had an awesome time & we will be going back.I loved it for him & us.Next time we'll be taking our lawn chairs & relaxing while Jasper has more fun

It's funny because obviously the person who posted this didn't notice that the author of the blog and the owner of the website that blog came from owns a rottie! So it's super that they're happy to have found a place where their dog can play and that they aren't afraid of pit bulls anymore, but what are they going to do if I show up with my dogs? Run in the other direction like a lot of people do now? Sheesh! People do not understand that Seaview Park has a certain type of dog play that isn't allowed at other types of dog parks - it is a classical type of dog park where dogs wrestle, hump, nip, and have fun with each other. It's not a pass and sniff park. Dogs interact - that's what they're there to do. And if you can't handle that for your dog you should take your dog and leave. But anyway - that's why I've been in a bad mood.

So Sasha - the dog at the top of this post is my favourite dog other than my own dogs and I think you can understand why - isn't she the cutest? I love her. Buttercup doesn't love her though - that's Buttercup's butt to my right - she was allowing me to give her some love for a few seconds in a row, and for that I'm eternally grateful! My friend Lori - who is Sasha's Mom loves Daisy as much as I love Sasha, so she had wanted to babysit Daisy for the weekend - but I had to go and snatch her back on Sunday because I missed her too much and Charlie was starting to become super depressed. Lori wanted to keep her - but Charlie was going to start to go into a serious depression at any moment, which nobody wants to see. It's hard to lose the love of your life with no explanation. Now that they're reunited everything's tickety-boo!
Posted by Joan Sinden at Tuesday, May 17, 2005