Wrestling doesn't only happen at the dog park! 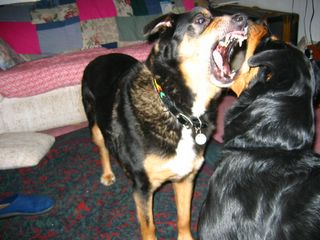 Wrestling doesn't only happen at the dog park!

This is Charlie and Daisy in the middle of the living room having a go at some wrestling. It's mostly mouth action when it's inside the house - thank dog. I don't think the lamps could handle too much more than that. It's mostly a call to action for me - it's a large scale - WE WANT TO PLAY - GET SOME TOYS SO WE CAN PLAY! And I usually relent and we start to play.

You'd think that in a multi-dog household that they'd be able to entertain each other - but what happens is that you just have multiple eyes staring at you looking at you to entertain THEM. Maybe I did something wrong at some point but that's how it is in my house. But I suppose you get what you ask for. Live would be pretty boring without them. I can't imagine how people can live with only 1 dog - how do they do it? I need way too much love for that.

Email ThisBlogThis!Share to TwitterShare to FacebookShare to Pinterest
Labels: wrestling