Thanks to my good friend Lori and her beautiful dog Sasha Philip has found his perfect forever home! We went up last Sunday to Berwick to meet them and everything seems to be working out wonderfully. It is so good to hear - Philip's new family can't know how happy they've made me by giving him a great place to live. It was slowly killing me watching him getting more and more stressed living here with us - I was even starting to question whether or not I should have saved his life he was becoming so unhappy living here. He had lived so long tied out in back yard by himself with no other dogs around him, to suddenly be thrust into a household full of dogs who liked to be in his face the whole time was really hard on him and he has SUCH a gentle soul that was sinking deeper and deeper into into his barking facade that I was really worrying about him. So to hear that he's gone to a home where they're really happy with him and he's not hardly barking and they can't believe how smart he is has just blown me away.

They're very lucky to have him, he's very lucky to have them and I'm very lucky to have found them too! I hope it continues to work for all of us! The pictures below are a couple that I took last Sunday when I dropped him off - when we were driving up a couple times I almost asked Lori to turn the car around and go home because I love Philip so much - but I know that my house is absolutely not the right environment for him and I'm SO glad I didn't do it! 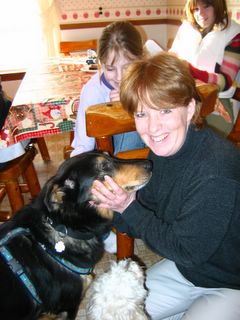 Philip with his new Mom and sister Raegan! 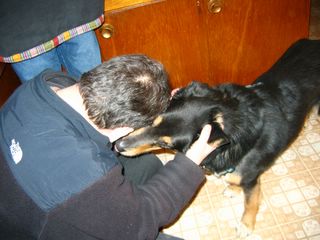 Philip going in for his first hug with his new Dad 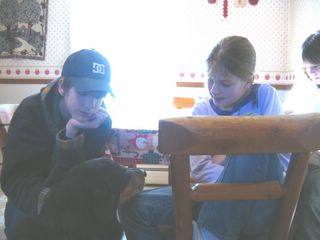 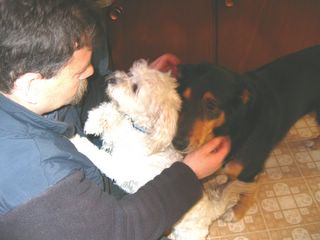 This is something that Philip doesn't have to put up with anymore - and look at the look on his face! Buttercup butting into his opportunity for good lovin' - he was going in for a hug and Buttercup ran over and jumped right in ahead of him - now he's got all the love to himself!