A Really Neat Idea for Us Christmas Grinches!

Last night I was putting away the dishes when the door bell rang and the dogs went crazy like they usually do and when I opened it there was a lady standing there with a box and I said - "I don't want to buy anything, sorry!" - and the lady said really uncomfortably - "I'm not selling anything - this is a Christmas present from the Morris family" - and the dogs kept barking and going crazy and we both decided that maybe she should just leave it on the front porch rather than her giving it directly to me. I think she was pretty relieved not to have to hand it directly to me!

In hindsight it's funny because it was the owner of the company who was delivering the gift to me - probably on her way home after a hugely successful day and here I am saying "I don't want to buy anything" like she's a door to door wreath salesperson who's trying to eke out a few extra dollars before Christmas when in fact she's got a really successful company! And it's successful because it's such a neat idea!

It's a little potted Christmas tree that comes with the decorations that you can keep until the spring and then plant outdoors! Is that neat or what? And it's great for people like me who don't particularly want to put up a tree for whatever reason, or for people in offices or hospital or nursing homes, or wherever - and it even comes with little lights and decorations. There was an article in yesterday's Chronicle Herald that I've pasted below and she also has a website at http://www.christmasmini.cjb.net

Here's some pictures of my tree which I put on top of the rat's cage - I'll post a picture AFTER the cats discover it! 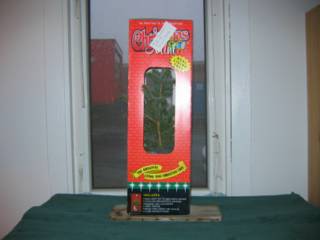 Here's the box it came in - it's shaped like a chimney! 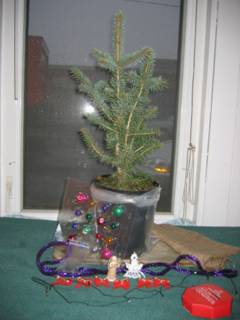 Here's what was in the box 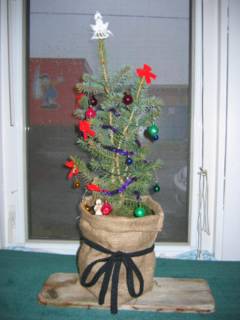 And here's the final product - isn't it neat!

And here's the article from the newspaper:

Donald Trump and Yoko Ono have something Nova Scotian in common.

Czarbro owner Gena Arthur opened the business in 2000 after trying to figure out how to avoid throwing out Christmas trees after the holidays.

After realizing she couldn't sell large trees with transplantable root balls, she came up with the idea of producing mini-trees.

The potted trees, developed with help from the Natural Resources Department and grown by Nova Scotia nurseries, average just under a metre tall, including pot.

"The problem with little trees is they only have a few branches," she said. "We developed a technology to grow full, more conical shaped trees."

The $29.99 transplantable trees come in a box resembling a chimney. They include a garland, lights, handmade glass ornaments, angel topper, tree skirt and bows. "We sell 2,000 to 10,000 annually," Ms. Arthur said.

This year's trees are select blue spruce. Last year she used balsam fir and Alberta dwarf spruce and next year plans to sell balsam fir again. The mini-trees are sold around the world.

"We have exported to Japan, Greenland, Iceland, Europe and the United States," said Ms. Arthur, adding the trees are popular with seniors and other people who can't or don't want to handle a large Christmas tree.

Ms. Arthur has sold the trees in retail outlets like Sobeys and Zellers in the past, but is selling them online (www.christmasmini.cjb.net) and toll free (1-866-646-4873) this year.

"We plan to distribute them nationally with a retail chain next year."

The New York connection came about in 2000 when she had excess inventory to sell.

"We took them to a tree stand at Wall Street and Broadway. They were selling so fast we couldn't keep up."

She said she hestitated about returning to New York in 2001, after the 9/11 terrorist attacks, but was gratified by the response she received.

"It was quite an eye-opening trip," she said, recalling how people bought the trees as Ground Zero memorials to those who died in the World Trade Center attacks.

She said a Donald Trump assistant bought a tree for the flamboyant entrepreneur-TV star, and later came back to buy 20 more for his staff.

"One of our representatives sold one for Yoko Ono," she said, adding that the trees, which can be kept for years and grow to full size with proper care, are being sold in the Big Apple by a New York tree marketer this year.

"The trees are really filling a niche market and hopefully putting a smile on people's faces."