When the husband and I were together we had named our dogs after American composers. Our first dog's name was George. That was for me. I had always wanted my dog to be named George because of the Bugs Bunny cartoon - when Bugs Bunny goes to the Arctic and the Abominable Snowman takes Bugs Bunny as his pet he says "I will love him, I will cuddle him, and I will call him George". So I wanted to name my first dog George. And my favourite American composer - and my favourite movie of all time was the George Gershwin story. Our second dog was named Leonard - the husband always wanted to name his dog Leonard - and our second dog was his dog. For Leonard Bernstein. Our 3rd dog was Charlie, my dog - for Charles Ives. I liked Charles Ives. And then we split up so the tradition ended. And I got Buttercup and Daisy. But I thought since Molson is a littermate of Charlie and Leonard I would revive the tradition one last time because it seems appropriate so I'm changing Molson's name to Philip - for Philip Glass. And he immediately started responding to the name and he looks like a Philip and Charlie, Leonard and Philip just sort of rolls off the tongue. So that's what they are now. Now I just need to get a picture of all 3 of them together! Good luck with that though because both Leonard and Philip are pacers - so to get both of them in one frame will be amazing!

But I have completely fallen in love with Philip. He is a mirror image of Charlie. He is exactly what Charlie would be like if Charlie would've been tied to a dog-house for the last 6 years. Which is really sad. So it's like Charlie and I have been given an opportunity to watch something that we know to be absolutely beautiful blossom - we know it's beautiful because we know how beautiful and perfect Charlie is. And when you look in Philip's eyes you see Charlie. I literally cannot tell them apart. I had the same collars on them that Lee Anne Tibbo had made and I had to change them because when I look at their faces they're the same. Their bodies are different - Philip is completely emaciated at this point - but their eyes are spooky in their likeness. I can't wait until Maggie Carruthers meets him. She's going to be blown away!

So I'm looking forward to having and adventure with Philip and Charlie and Leonard. Thank-dog the SPCA deemed him unadoptable so that I could adopt him! What luck for me! Charlie is a once in a lifetime dog and now I have 2 once in a lifetime dogs. Buttercup is my heart and soul, just to look at her is to feel like my destiny has been fulfilled, and to have Daisy squish up next to me in bed is to feel such comfort and solace that I never want to get up.

People ask me how I can have so many dogs - I have to ask - how can people live with so few? Their lives must be awfully empty! 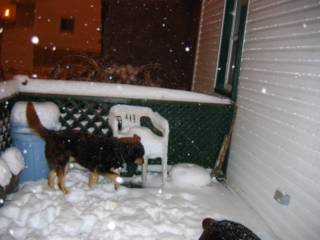 Philip making sure all his pee spots are covered...with pee.