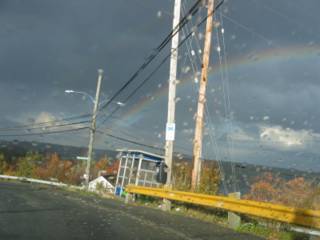 A picture of a rainbow over the arm!

There was a bit of a rain storm and there was a huge rainbow over Halifax for a second - I was driving down Herring Cove Road and took this picture on the corner of Herring Cove Road and Cowie Hill Road when I was driving to my parents for supper. I was too lazy to get out of the car though because it was raining and I'm so sweet that I would've melted if I would've gotten out as well... hence the water on the windshield.
Posted by Joan Sinden at Tuesday, October 19, 2004