I sent the following post to my "Dogs Deserve Better" Yahoo group of which I'm a co-moderator.

This is a story from New Brunsick, Canada - and it's interesting - it happened yesterday and it involved a chained dog (who along with a dog that also lived on the property that was kept penned are now dead). New Brunswick is currently gearing up to study what to do about dangerous dogs because they've had a lot of these kinds of attacks lately involving children and they even had an enquiry last year after a child died after being mauled to death by 3 rottweillers. But anyway - they're contemplating enacting a law where all dogs have to either be on leash, muzzled or CHAINED OR PENNED whenever outside the owners house! And at the same time they have incidents like the following news story happening. It's like the whole province just
doesn't get it. Anwyay - I've attached the news story for your information. 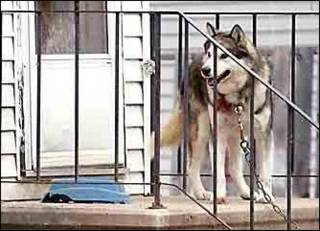 A three-year-old boy is in serious condition after he was attacked by this dog, seen on the back steps of a home on the St. Mary's First Nation in Fredericton on Tuesday.

FREDERICTON - A three-year-old boy was hospitalized with facial injuries on Tuesday after the latest in a string of dog attacks in New Brunswick.

Bryson Brooks was attacked by a husky after he followed two older children into the backyard of a home on the St. Mary's First Nation in Fredericton.

The dog, which was always tied, turned on the child after he started petting him, said police.

Officers said the boy was rushed to hospital with "major facial injuries."

The husky and a Rotweiller, which was kept in a nearby cage, were both put down by a police officer at the request of the owner, Wanda Brooks.

The attack is one in a series of incidents, and comes just as the province prepares to hold hearings on legislation that could ban certain breeds.

On Saturday, an 11-year-old girl in Rothesay was sent to a hospital for stitches near her eye and for dental work after a large dog bit her face.

That attack came a day after the announcement that a New Brunswick legislative committee will hold public hearings on legislation that would place restrictions on certain breeds of dogs, including Rottweilers.

Last year, four-year-old James Waddell was mauled to death by three Rottweilers at his home on Kingston Peninsula.

The death of the boy, and the fact he was involved with child protection, prompted New Brunswick's Child Death Review Committee to recommend that social workers carefully assess the risk posed by animals living in the homes of young children.

On St. Mary's First Nation, a woman who lives a few houses away from the little boy described a struggle with the animal to free the child.

"We were out back and heard yelling," said Sharon Knockwood.

"I ran over to check it out. I happened to have a shovel in my hand and I saw the little boy, Bryson, and the dog had him pinned to the ground."

Knockwood said her brother-in-law, who was following her, took the shovel out of her hand and wedged it between the dog and the child, allowing the youngster to be removed.

This is just me talking now - but has anyone else noticed that with the exception of the drunk breeder in Toronto walking the 2 pitbulls in the middle of the night that almost killed him (for what reason they attacked him we may never know) it seems that just about ALL the dog attacks in the news in the last couple months - and there seems to have been an explosion of them - have been either
1. unattended children approaching unattended dogs who are chained or confined in some way;
2. unattended dogs running at large attacking strangers - and the dogs are usually running at large because the owners weren't properly supervising them because they were chained outside and didn't realize they'd gotten off their chain and because they'd been on a chain all their life they weren't socialized at all and were therefore just a ticking time bomb.

Marjorie at Goodpooch.com has once again gotten it all right when she says that the key to not getting bitten by a dog is
1. Avoid unsupervised dogs;
2. Never leave children unsupervised with dogs and;
3. Ensure our own dogs are properly socialized and adequately supervised at all times. (from http://www.goodpooch.com/MediaBriefs/GPcanineprimer.htm#bitefacts)- I am in love with Marjorie and Goodpooch - I consider that website to be the bible of all things dog-socialization related.

Unfortunately though, I think we're fighting a losing battle in regards to certain breeds of dog and having them banned. The Sue Sternberg dog is going to win (dogs under 30 pounds who are soft and fuzzy and cute looking with no apparent issues). They can kill children too, it'll just take a few more chomps. So enjoy the extraordinary love that your bully dogs give you - you may be the last generation who does.
Posted by Joan Sinden at Wednesday, September 29, 2004