Snookums in PEI is just like any other pet store that sells live animals. They are a broker for puppy mills. Puppy mills treat dogs like livestock - like cows or pigs or chickens. It's not comfortable for us to think about because we eat cows, pigs and chickens but we don't eat dogs - we live with and love dogs as members of our family. But they are just like chickens and cows to the people who own and operate stores like Snookums. They are a commodity to be bought and sold and they don't particularly care if they're selling you a healthy, genetically sound product. And they also don't care from where they're getting their product or how the parents of the product they're getting is treated or what the conditions that they're living in are like.

I had a foster dog named Eddy who is the most soulful, spectacular specimen of a perfect bouvier that you'll ever meet. I've attached some pictures below of her. We think she was a breeding bitch in a puppy mill who was dumped when she became too sick to be productive or take care of her puppies. Her full story with her happy - luckily - ending - is on my website at http://www.geocities.com/joan_sinden/ebony.html The first picture below was taken the first night I brought her home to my house. The 2nd picture shows a little bit of the baldness that she suffered from when I got her. The 3rd picture is one I took with her new Mom when she was adopted. Puppy mills DO exist here in Nova Scotia, they DO exist here in Halifax County - the puppies that are at the local pet store DO come from puppy mills - their parents ARE suffering horrible lives.

The only way we can stop the suffering is to stop shopping at those stores. The only way we can stop it is with our dollars. Government regulations isn't going to stop puppy mills. LACK OF SALES WILL. Within a very short time we can put an end to puppy mills and the horrible suffering if we just stop being lazy in our puppy buying habits and stop shopping at pet stores that sell live animals. It's as easy as that. If you take away the market then you take away the need then the puppy mills will shut down. End of story.

It will be a lot more expensive to get a dog because it'll cost a lot more to produce dogs - but just think of how much suffering will be saved. Only accidental breedings and responsible breeders producing dogs! What a world that would be! Wow! 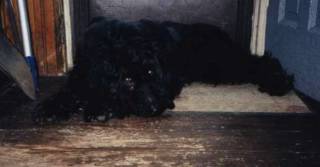 Eddy her first night at my house 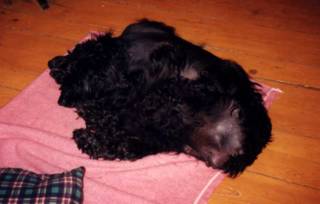 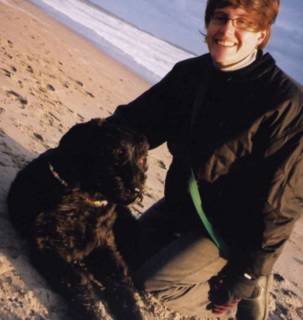 Eddy with her Mom in November 2003