So what else can I say? I've fallen in love? Until Friday night I had no idea that this whole sub-culture existed or that it was possible for a rat to be affectionate. but this little thing has just stolen my heart. She just cuddles right up in my arms like as if that's the only place she wants to be. Well actually right now she's running around her cage like her heads cut off so I think she's not too interested about being in my arms right now. She's got a big rabbit cage to play in. Now I just have to work at getting some fat on her, and see about getting her scabs healed. If they don't disappear now that she's got a lot of room to move to distract her from scratching she's going to go see a vet. I don't see any fleas, so hopefully it was just stress scratching.

It will be amazing if the dogs (actually I know all the dogs except for Daisy would)let me carry her around. I'll just have to do some special training over time. And be veerry careful. 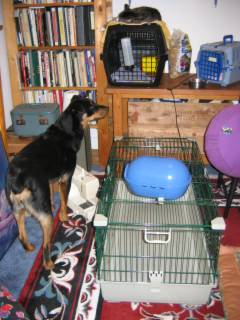 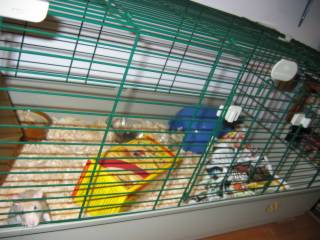 Email ThisBlogThis!Share to TwitterShare to FacebookShare to Pinterest
Labels: Rats